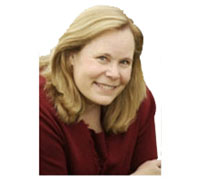 It was the year I first heard the kaleidoscope of voices. They harassed me for weeks over what I should be that night, providing ongoing commentary like: “Stupid idea;” “Boring;” “Not scary.” Even the lure of Milk Duds, Good ‘n Plenty, and Sugar Babies wasn’t enough to make this shy seven-year-old decide it was fun to dress up, knock on doors, and speak to neighbors, let alone strangers. I hated Halloween.

What if no one understood my costume and I had to explain it? What if someone made fun of me? What if someone had a costume like mine? What if no one had a costume like mine? I just knew mine would be the worst, so I announced I didn’t want to go trick-or-treating that year. Fortunately my parents’ wisdom prevailed, I survived Halloween, and temporarily slayed those inner self-esteem demons.

Now, sounding familiar after decades of mental lashing, the voices of Judge, Critic, Analyzer, Derailer, Unlovable, Fear, and Not Enough can still be an arsenal that ambushes my confidence, kills my ideas, and pushes me to shadowy places. Judge and Critic visit most often. Others, like Unlovable and Not Enough, wait like cats to pounce when I least expect them. And a few rarely speak, yet have the power to overwhelm me as my imperfections, limitations, and mistakes are illuminated with a force that brings feelings of self-doubt, guilt, or unworthiness.

Several years ago, when fighting bouts of depression and welling anger, I was prodded to consider that no one was thinking the things I ascribed them to be thinking. No one was judging me as harshly as I was, and no one saw me as imperfectly as I saw myself. With out-of-control negative self-talk, I’d become an enemy to my own interests. In an act of self-protection, it was then that I created the new voices of Cheerleader, Believer, Dreamer, and Real Person.

Over the years, I’ve learned to control and ignore the negative voices. At least, most of the time. I have fun labeling them, talking back to them, and replacing them. Still, there are days that I find myself hearing their words.

It’s taken me decades of focused effort to tame the negative voices and evolve positive ones, but in doing so I’ve changed more than my thoughts. I’ve changed my life, and how I see its opportunities, people, and the world around me.

I still hear voices, and I’m still not fond of Halloween. But I’ve learned, in the scheme of things, I’m in charge of what I put in my head and what I choose to believe about myself. So when I don’t like the scary voices that limit my life, cloud my optimism, or tame my passion, I create new ones that open doors, build my future, and show me new possibilities. After all, they are my voices.