Music to listen to while baking: Uprising foods 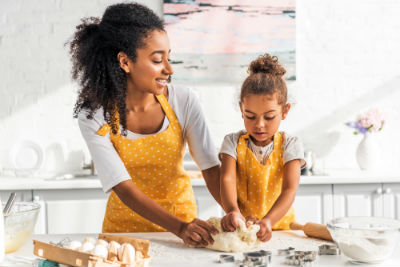 Why should the only sounds you hear while you are baking be your kitchen equipment? Make that next baking session a private party, or for two if you have an extra pair of helping hands.

Get in the mood for food with this inspirational music playlist full of songs that will add extra life into your mixing, measuring, and pouring. You deserve some sweet beats to make cakes, provide pies, and boogie with your cookies.

Until the 2018 A Star is Born movie soundtrack, who knew that actor Bradley Cooper could hold his own with pop singer Lady Gaga? There is nothing shallow about this emotionally triumphant track that will have you putting that extra bit of love into your cakes and cookies.

Now it is time to bob your head and bake like a boss with the help of one of Drake’s biggest hit songs. Sing along while you ignore the haters that don’t have any idea how hard it is to get the kitchen smelling as sweet as you have it right now.

This Grammy-nominated 2018 track from Justin Timberlake’s Man of the Woods album is a bouncy yet graceful tune with a country twang that will keep your culinary groove pulsating and your energy upbeat to go all the way with your confectionary delights.

Country legend Bonnie Raitt is talking about an angel in Montgomery. But if you are making an angel food cake or some heavenly apple pie, you can still earn your wings as you look after your family and friends with your delectable desserts.

It is time to get funky… not with your sense of smell, but with your sense of hearing. Crank up some Bruno Mars as he taps into his inner James Brown and Rick James as he updates the 1970s era of funk for a modern audience. Good thing you are surrounded by all that sugar to keep you moving when you start feeling tired from dancing so hard.

WhatSinger Chris Stapleton, who you heard earlier on our playlist with Justin Timberlake on “Say Something,” takes the reins all by himself for a slow and sultry ode to rebounding from pain. As your sweet desserts simmer on the counter and prepare to be consumed, they will knock out any lingering misery without needing a Tennessee whiskey hangover the next morning.

If you are looking for the heroic anthem to pat yourself on the back to when you exceed your expectations when that cake you baked looks better than the recipe picture… play this one loud. Take pride in your skills, and know that you are the king or queen of your kitchen today.

Who says that hip hop can’t be from a Christian perspective from two church-going rappers that brag about being saved? It sounds like a party, just Andy Mineo, Lecrae, you, your baked goods, and God.

Bob Dylan brings his voice, full of conviction, yelling, ‘how does it feel?’ Sing your answer right back to Bob, ‘it feels like a great night for cookies!”

Michael Jackson moonwalks across your eardrums with his electric crooning, lighting up that fire that has laid dormant in your dancing feet all week. Why should the hottest thing in your kitchen be the oven? Raise the temperature with pure hot adrenaline why you bake.

The soothing plucks of Johnny Cash as he captivates a live audience with his humorous tale of a young man hating his dad for naming him Sue will keep you chuckling and thoroughly entertained as you concentrate on your glorious baked goods. Let Johnny tell his story in song, and you tell yours with your journey from separate ingredients to finished food.

With its contemporary take on 1980s new wave Talking Heads-meets-The Cure vibes, Muse will become your muse in the kitchen with their rebellious, rollicking rock ‘n roll.

From pop to the King of Pop, from country to hip hop and a little bit of funk, folk, and rock n’ roll, this is the best baking music to make the most of your oven offerings. Feel the sugar rush from these songs before your deserts get chewed by your sweet tooth.