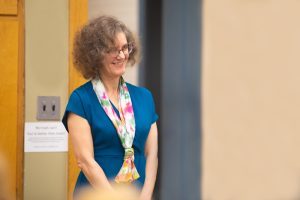 Professor Joan Griffing listens to tributes from colleagues and fellow community music enthusiasts during a reception in Lehman Auditorium.

Joan Griffing became department chair of the Eastern Mennonite University music department not long after she joined the faculty. Twenty-two years later, she has left an indelible mark on the campus, the local and regional arts community, and many, many students.

In August, she’ll begin as Tim and Gail Buchanan Endowed Chair of the Fine Arts Division at Friends University — “an incredible opportunity,” she says, to do similar collaborative work in the far larger and more varied arts community of Wichita, Kansas.

At a reception this week in her honor, Professor James Richardson praised Griffing’s mentorship, her abilities as an “exceptional musician,” and “her compassion for the whole person, whether that be a colleague or a student.”

“She brings to everything she does a concern for the soul and the whole student,” he said. “When I think of Joan, I will always think of what I have heard her say many times, and I’m sure many of you have heard her say it as well: ‘At the end of the day, it’s all about the student.”

Professor Emeritus Kenneth J. Nafziger, longtime colleague in the EMU music department, commented that he had “seen many musicians come to EMU with significant gaps in their learning and grow as accomplished performers under her careful guidance, experience both solo and ensemble work and play in a variety of settings, all of which are exactly what music is supposed to do.”

Nafziger and Griffing have also spent many years working together with the Shenandoah Valley Bach Festival. The conductor thanked the concertmaster for expanding his own understanding of strings instruments and string players to the benefit of all. “She has been able to translate my musical wishes into sounds I had hoped for and I am most thankful.”

Also in attendance were Bach Festival President Michael Allain and board member Ming Ivory, both of whom shared anecdotes and wished Griffing well on her new endeavors.

The reception was attended by several former students, four of whom now work for EMU (two as violin instructors), but also representatives of community arts organization that Griffing has supported and promoted, including the Shenandoah Valley Children’s Choir.

When asked to identify her own accomplishments, Griffing lists two more programs for youth.

“Both Sharon Miller and I started to play violin in public schools programs,” she said. “That was something that was missing here that she and I wanted to start, and I’d have to say that’s something I am proud of.”

The Harrisonburg City Schools Strings program, a program of EMU’s Preparatory Music program directed by Miller, began 11 years ago and is now offered at all six elementary schools and both middle schools.

Griffing also helped start the Any Given Child Initiative, a partnership of Harrisonburg City Schools with the Kennedy Center in Washington D.C. to provide equal access to arts for students in K-8th grade.

“That’s been fun to work with dancers and visual artists, to get to know artists of different stripes and think about ways we can bring them together,” she said.

An advocate for music at EMU

At EMU,  Griffing championed the interdisciplinary major, an inventive redesign of the music curriculum to broaden accessibility and encourage students to combine a music major with a second major in a different field.

Hearkening back to her own roots, the outreach string quartet class remains a favorite offering, as “a way for students to learn to take their music out to marginalized communities,” she said, such as the Virginia School for the Deaf and Blind and Gemeinschaft Home for ex-offenders.

Reluctant to single out one or two of her many students over the years for individual accolades, Griffing says she’s most proud of her performance majors. “To a one, they have each accomplished more than they thought they could achieve in their four years,” she said. “All of them won our semi-annual concerto/aria competition. To eventually play a concerto with the orchestra takes guts and preparation and hard work, and to get to the performance level they do is really quite an achievement.”

Of her administrative work, which included fundraising, planning, mentoring, scheduling and more, Griffing says that choice of involvement enabled her “to help more than just my violin students.”

“I enjoy helping my colleagues do their jobs,” she said. “To me, that’s servant leadership: supporting my colleagues so they enjoy coming to work every day. Ultimately that helps the students, too.”

(To this, she adds that she is also doesn’t mind getting into “the nitty-gritty, which arts people sometimes don’t much care for, understandably so, because they’d rather do their arts.”)

All this while, Griffing has led an active professional career, performing as first violinist with the Virginia Symphony Orchestra and Eastern Music Festival, and concertmaster with the AIMS Festival Orchestra in Austria and Italy, as well as with the Coronado, Grand Teton, Norfolk and Spoleto festivals. She’s performed in Taiwan, Brazil and Australia, and spent a sabbatical at the University of Otago, New Zealand, studying the role of music in peace and conflict issues.

As founding member of the chamber music group Musica Harmonia, she regularly tours to promote peace and cultural understanding through musical collaboration. The group has recorded two CDs.

Griffing says she intends to keep many connections alive from her new home in Kansas. She and her husband, clarinetist Leslie Nicholas, will return to Harrisonburg every June to play with the Shenandoah Valley Bach Festival.

And she’s looking forward to making new connections, too.

“I have always had a strong interest in the bigger picture of all the arts, how they connect and the possibilities of collaboration. The arts can and do change people’s lives for the better,” she said. “By overseeing all the arts at Friends and embedding them across campus, I’ll be able to have a broader impact than I am able to have here. That’s very exciting to me. Without the many years of experience at EMU, this new opportunity would not be possible.”