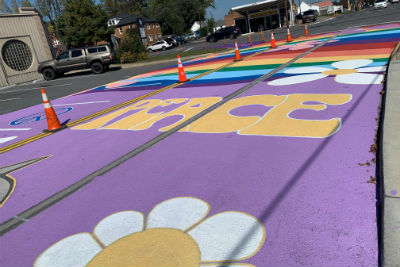 WAYNESBORO — A new mural is in town.

The mural painted last weekend on Poplar Avenue in front of Waynesboro High School is an example of tactical urbanism.

“It’s like a super crazy uber bright crosswalk,” said Bridget Roberts, an art teacher at Waynesboro High. “[The mural’s purpose] was to bring attention to that area because a lot of our students walk from the high school to the CTE.”

The mural was made possible by a grant from the Virginia Department of Health, “because it’s [about] safety, and [the department is about] health and safety,” Roberts said.

Timothy Wion is a science teacher at Waynesboro High, and a member of Virginia Walkability Action Institute.

Through the Department of Health and the Virginia Department of Transportation, $10,000 provided 45 gallons of paint and supplies for 40 volunteers to create the 150 feet by 40 feet mural on Poplar Avenue.

Roberts led the project with her advanced art students who are juniors and seniors.

“So each student had to come up with a design,” said Roberts of the mural.

Then the class voted on the top five designs.

“They were all very encouraging and supportive of each other,” Roberts said. 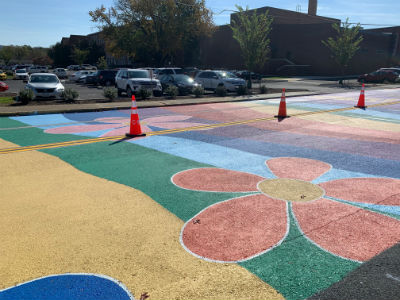 Then the top five designs were shared on Facebook where the community was invited to vote for which design would be painted on Poplar Avenue.

Roberts said that Wion helped to fit the design within the proportions needed to fill the space on Poplar Avenue.

“He really wanted it to be about peace and love, and bringing everyone together,” Roberts said of Zach’s design.

The mural was painted from Friday afternoon through Sunday morning by students and community volunteers.

“It was so amazing,” Roberts said. She also enjoyed seeing her former students.

Roberts said some of her former Waynesboro High art students returned to help with the project, including Tristan Turner.

Wion said that tactical urbanism is a way for local community members to acquire grant funding and “actually get something done outside of the funds from our locality.”

Virginia Walkability Action Institute determined several sites in Waynesboro that are a concern for pedestrians, including the intersection of Rosser Avenue and Main Street.

The site chosen for tactical urbanism, however, had to be in need of improvements and also be improved within the group’s scope of funds. The intersection of Rosser Avenue and Main Street was not within the scope of the group’s project.

Poplar Avenue and Main Street was because a crosswalk and pedestrian button had improved the intersection’s access for pedestrians years ago.

“But still a lot of pedestrian traffic [in that intersection],” Wion said. 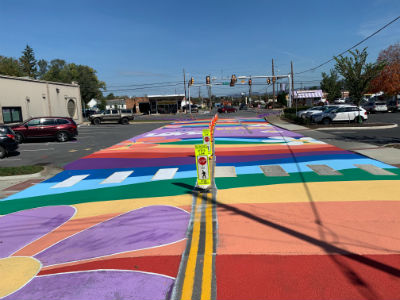 Also, the section of Poplar Avenue between the high school and CTE could easily be blocked off without hindering local traffic while it was painted.

The concept of tactical urbanism, according to Wion, is to “do visible, thoughtful, short-term work that could become permanent.”

“Our city is set up for cars,” Wion said of Waynesboro’s streets.

Tactical urbanism “is a grassroots attempt at pointing out places that can be better [for pedestrians],” he said.

Wion said that tactical urbanism is important because “it gives power to the community to visualize their city in a different way,” while also having the ability to do something about that vision.

“It should be OK and safe to walk across town,” Wion said.

But what about residents who do not have a car?

“We can do better. We can make safe routes part of town,” Wion said.

“I think everyone who sees it, it makes them happy,” Roberts said.