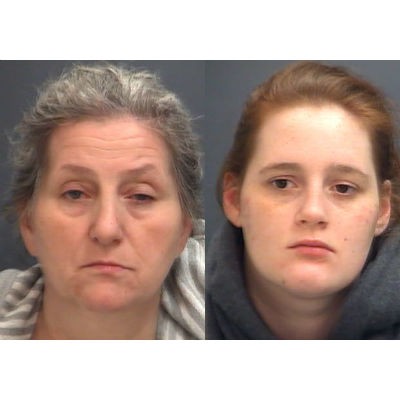 Clarissa Luba McKenzie, 51 years old, and Erica Catlin McKenzie, 24 years old, both of Waynesboro are in Middle River Regional Jail after last night’s run in with officers.  On December 23 at approximately 9:45 PM, an officer was conducting a foot patrol of Walmart when he noticed the elder McKenzie walking around the store with merchandise in a cart.  She noticed the officer as she tried to leave with the merchandise at one exit.  She then attempted to leave through another exit when the officer stopped her.  He arrested Clarissa McKenzie for Felony Theft/Having Two or More Prior Convictions of Larceny.

During the her arrest, the mother indicated she was at the store with her daughter who left the store prior to Clarissa’s arrest.   Knowing that McKenzie had two daughters and one of them being Erica, who was wanted by multiple jurisdictions, another police officer checked the parking lot for the McKenzie’s vehicle.  When he found it, he noticed a young female sitting inside.  When he asked for her name, she indicated to the officer that she was “Victoria McKenzie” and provided him with a corresponding birth date and social security number.

However, the officer had some past interactions with Erica McKenzie and believed the female was providing her sister’s name and personal information in attempt to mislead him.  A check of “Victoria’s” information through the dmv indicated different identifying characteristics than those of the female who the officer had detained.  When the officer confronted the female with the discrepancies in the descriptions, she relented and admitted she was Erica.

Erica was arrested on the following charges: