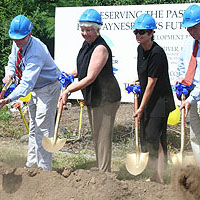 Redevelopment team members for the Mill at South River in Waynesboro announced today that the project has successfully completed a $5.5 million voluntary remediation and site preparation phase of the property redevelopment. It is the largest known voluntary Brownfield investment by an individual in Virginia and ranks in the top 7 percent in size of Voluntary Remediation Program sites in the state.

The nearly 40-acre site with 490,000 square feet of buildings, owned by Beverley Shoemaker, has been committed to the Voluntary Remediation Program since 2005. With the voluntary environmental remediation and site preparation complete, as well as planned unit development zoning in place for mixed use, the property is now positioned to move to the first phase of market-driven redevelopment.

According to Jim Shaw, assistant city manager for Waynesboro, the Mill at South River’s efforts to preserve and restore the historic buildings on property, along with the site’s proximity to the downtown historic district and residential neighborhoods, is symbolic of the city’s attempt to reshape its economy through adaptive reuse, while paying homage to its industrial heritage. Located in a Virginia Enterprise Zone, it is eligible for state and local grants and tax incentives, and Shaw hopes this will lead to the next phase of development, which would involve adaptive and mixed reuse of the property.

“We’re not done here,” Shaw said. “As a city we need to foster active conversation about how, as a community, we can continue to support this project and others like it.”

Shaw, along with the redevelopment team, sees the Mill at South River as ideal for office, commercial, artisan, education and residential use. The Mill’s location along the South River also makes it ideal for a research facility, coldwater restoration program and fish hatchery, which are being considered. The first phase of future renovations has been registered for Leadership in Energy and Environmental Design certification with the Green Building Certification Institute.

“The possibilities are numerous for anyone who has a vision to support the next phase of development,” Shaw said. “The Mill at South River is poised to support Waynesboro’s vitality and to meet the market needs of this growing area.”

Charlie Williams, a partner with the Roanoke- based law firm Gentry Locke Rakes & Moore and a LEED-Accredited Professional, oversaw the legal intricacies of environmental studies, regulation, compliance and risk management for the Mill at South River. Williams says the project would not have been successful, nor even possible, without the significant personal investment of its owner, Beverley Shoemaker.

“Her vision pushed this project to a reality,” Williams said. “This was a complex site, filled with environmental challenges and unique considerations that had to be addressed. Along with the City of Waynesboro,Mrs. Shoemakerrecognized early the importance of preserving existing structures, native habitat and river banks, protecting against potential flooding and connecting with the community. Her leadership is to be commended.”

According to Meade Anderson, CPG, Brownfields Program Manager for the Virginia Department of Environmental Quality), The Mill at South River is unique for a Virginia community the size of Waynesboro and one that other municipalities throughout the state can use as a strong example of what can be done to their own Brownfield properties.

“We’re going to continue to see this concept of redeveloping old industrial sites for mixed-use as economic development groups work to revitalize their downtowns,” Anderson said. “Few small-to-mid-sized communities have taken into account the potential for adaptive mixed-use for a Brownfield property, but under Mrs. Shoemaker’s direction, in partnership with Waynesboro city planners, the Mill at South River has become an ideal voluntary remediation project, certainly the largest known by an individual investor in the state, and demonstrates just what can be accomplished and what the potential for distressed and underused Brownfield properties holds.”

Anderson referred to a 2010 study by the University of Delaware which concluded that every dollar spent by the state’s Brownfield Assistance Program returns almost $17.50 on the state’s initial investment. Based on Delaware’s study, Waynesboro and the state of Virginia will enjoy a substantial return on Mrs. Shoemaker’s investment.

“Everything went right with the Mill at South River project,” adds Anderson. “The redevelopment team made every effort to inform and involve the community and collaborated extremely well with each other under excellent vision and leadership. As far as private investments go, there can be a hesitation to involve local government early and heavily, but that certainly was not the case here. As a result of the proactive efforts by Mrs. Shoemaker and her team, the Mill at South River has been a huge success.”

The Mill at South River, located at Arch Avenue and 12thStreet in Waynesboro, was originally the Crompton-Shenandoah Company’s Waynesboro plant, a manufacturer of velvet, corduroy and velveteen fabric. The buildings on the complex were constructed, and expanded, between 1926 and 1971, and currently provide leased space to various small industry and artisan tenants, warehouse space to trucking and other industries and storage rentals.