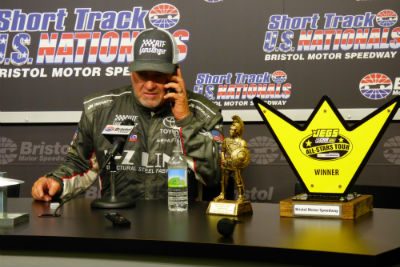 Mike Skinner was “snake bit” by his own doing last year at the Short Track US Nationals at Bristol Motor Speedway and he was bound and determined not to let it happen again another year.

But as fate would have it, he would have to dance around that charming snake one more time.

Capturing the pole and setting a track record earlier in the afternoon, it appeared that Skinner had shaken the spell.  But the start of the Pro Late Model Feature nearly cost the former NASCAR Truck Series regular and Cup Series driver, a chance at redemption.

Running over debris and sustaining damage to his master cylinder nearly cost the NASCAR veteran early a chance to finish the race.  But after telling his pit crew that he had a “hot rod” and telling his crew to remain calm, the crew went to work and “jury-rigged” the reservoir and the master cylinder.

“I don’t even want to see it,” replied Skinner in victory lane.

That early caution forced the Port Orange, FL driver to visit pit road several times to fix issues involving his Toyota Racing Camry and the second caution came out as race leader Clay Greenfield trying to avoid a lapped car, gets collected and the front end of Greenfield’s racecar is severely damaged after being hit by James Kirby III.

Quebec’s Martin Latulippe is also collected in the mayhem forcing a red flag condition for cleanup with 89 laps to go. After the restart, the resourceful wily NASCAR veteran began his run to the front.

Skinner’s Toyota, showing no signs of problems after the first caution and work in the pits, moved from 11th to 2nd and challenging Desoto, KS native Mandy Chick in the second position.

With Jack Dossey III in the lead, Skinner would have to navigate around Chick and other lapped traffic trying to keep pace with Dossey before the third caution comes out after Louisville, KY’S Trey Craig,  hit the outside retaining wall and resets the leaders with 60 laps to go.

On the restart, Dossey lets Skinner go by him and Skinner would retake the lead, with Dossey in second, Mandy Chick in third.

In the closing laps, Skinner held off the field for the redemptive win at The Last Great Colosseum after losing the race of his own doing on the high banks of Bristol, last year.

For the retired race car driver, its not about winning money. It’s about putting together a good race car and paying the bills all while having some fun along the way.