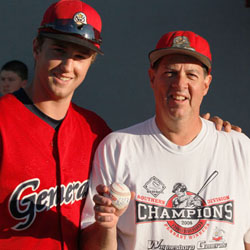 Mike Meadows, possibly the Waynsboro Generals’ biggest fan, has been attending local games since he was 15 years old. Not only a spectator, Meadows volunteers time to help out at the park helping out with any breed of work he’s handed.

At the Generals home game this past Tuesday, Meadows received his yearly honor of throwing the night’s first pitch. “I practiced,” he said, referring to the strike that he threw on the pitch, and his time out in the bullpen warming up that preceded it, “and that made all the difference.”

And then there’s the story of the “lucky penny.” Before the Generals defeated Winchester 14-1 a week ago, Meadows found a penny at Kate Collins Field and placed it on the brick wall behind home plate, sparking a winning streak for the home team.

When a game is in its final inning, it’s no daunting task to find Meadows. He’s made a reputation for himself by standing before the fans and rallying them just to “help the General win” and provide a positive surge of morale.

On Tuesday night’s game Meadows ran with the kids when a foul ball was sent huddling close to him. Yes, even after all these years, Meadows is still chasing after foul balls, and successfully getting them to. However, he couldn’t resist giving the ball to one of the young boys that had joined him in the chase.

Perhaps it’s simple things like these – the atmosphere, the people, the game, or it’s a combination of the lot that keeps Meadows coming back, game and game again.