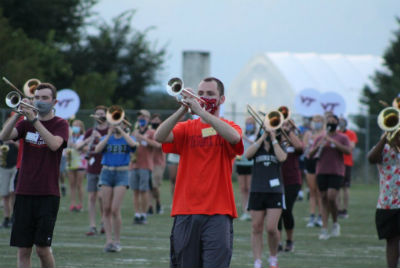 Ben Sheppard, center, and The Marching Virginians at practice. Photo by Krista Timney for Virginia Tech.

As the talented trumpeters, clarinetists, and drummers of The Marching Virginians prepare for another year of performing “Tech Triumph” at football games and university events, they have an advantage that few marching bands can match: their very own weather forecaster.

Ben Sheppard, a senior majoring in meteorology in the College of Natural Resources and Environment’s Department of Geography, has been providing detailed weather forecasts for the marching band since his freshman year.

“As a first-year trumpeter and a meteorology major, all of my friends in the trumpet section would joke that it was my fault when the weather was bad,” said Sheppard, who has played the trumpet since fourth grade. “So I started using what I was learning in class to write up humorous weather reports for the section and sending them out. My friends were excited to read them and very supportive of what I was doing. By my junior year, the band directors were asking me if I could send my reports to them to help their planning.”

Sheppard’s initiative led to him being designated as the first-ever “Official Forecaster” of The Marching Virginians this year, a leadership position that recognizes his contributions to the band.

“Ben is an extraordinary student and a huge asset to the band,” said Chad Reep, assistant director of athletic bands. “We knew we wanted to have him as part of our student leadership team, so we created a position especially for him. Ben takes his job very seriously and does a great job of keeping our band safe and prepared.”

Sheppard, who also provides forecasts for away games and exhibitions that the band travels to, said that he particularly enjoys the challenge of focusing his forecasting on a specific location and time frame.

“I utilize information from various forecasting sites, obtaining charts that my training in meteorology has taught me how to analyze,” he explained. “I use that information to derive forecast parameters like temperature and wind speed and atmospheric conditions, which I’ll put into a concise message to the band directors. Since I’m forecasting for a small, precise area for a short period of time, I can zoom in and really nail down the parameters accurately.”

With band participants taking extra steps to meet health guidelines to prevent the spread of COVID-19, having accurate weather forecasts has taken on a greater significance. Since The Marching Virginians are required to practice outdoors, it is important for band leaders to know what weather is on the horizon.

“Ben is extremely professional in his approach to this position, and he has successfully kept the band safe from inclement weather several times already,” noted Polly Middleton, director of athletic bands and a faculty member in the School of Performing Arts. “But the best part about working with him is the absolute enthusiasm with which he approaches everything he does. Ben has a contagious excitement that translates to the entire band. I know I speak for all of us when I say that we are better because of Ben’s involvement in The Marching Virginians.”

Sheppard traces his interest in meteorology to middle school, when Hurricane Irene’s path brought it near his hometown of Silver Spring, Maryland, in 2011.

“Irene came close enough to knock down trees in our neighborhood,” he said. “I remember bailing out our window wells with a bucket as they flooded from the rain. It was then that I got the idea I wanted to predict and understand big storms.”

In addition to his meteorology coursework, Sheppard has done atmospheric research for the Johns Hopkins University Applied Physics Lab, where he has landed paid internships for each of the past two summers.

Sheppard, who plans to apply for both full-time job opportunities and graduate school after obtaining his degree, notes that The Marching Virginians are working hard to continue their legacy as the spirit of Virginia Tech.

“Our directors are considering all options for performing this year, with an aim at maintaining our connection to the football team and the wider community,” he said. “And if the band is outdoors at any time this year, I’ll be there to forecast it.”