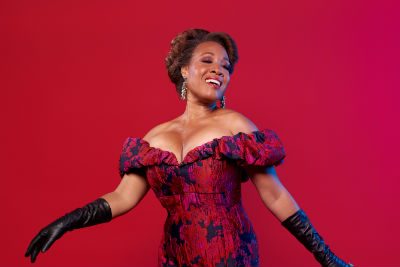 Metropolitan Opera star Janinah Burnett, currently appearing in Phantom of the Opera on Broadway, will be the featured artist at the EMU Gala Concert set for Saturday, Nov. 9, at 7 p.m. in Lehman Auditorium.

The acclaimed soprano will perform classic arias of Puccini and Verdi, as well as jazz showstoppers by Ella Fitzgerald and Duke Ellington, accompanied by the university orchestra and jazz band.

Burnett says she’s “thrilled to be joining EMU for the gala,” and is bringing some of her favorites to the occasion, including Sempre Libera from Verdi’s La Traviata, the jazz selection Almighty God from Duke Ellington’s Sacred Concerts followed by “a hot rendition” of How High the Moon.

“Ms. Burnett’s presence makes this a concert event unlike any we have ever had at EMU,” said Professor David Berry, who chairs the music department and will perform as well. “We’re fortunate to have a musician of her caliber sharing her immense talents on the same stage with our student musicians.”

Beginning her professional performance career as Mimì in Baz Luhrmann’s presentation of Puccini’s La Bohème on Broadway, Burnett received tremendous acclaim winning the Los Angeles Stage Alliance’s “Ovation Award” with a record 82 consecutive sold-out shows. She joined the Metropolitan Opera in 2008 for their productions of Carmen and La Bohème, and has since returned for Parsifal, Le Nozze di Figaro, La Rondine, The Enchanted Island, Iphigénie en Tauride, Elektra and Manon. She recently sang in a revival presentation of the opera Voodoo by the prolific Harlem Renaissance composer, Harry Lawrence Freeman.

Berry was an undergraduate student at the Eastman School of Music when Burnett was in graduate school. The friends also performed together in New York City with the Harlem Chamber Players.

WMRA public radio’s Kimberlea Daggy will host the evening, which includes a full slate of talented professional musicians on faculty, as well as many student musicians and others from the local community.

Professor James Richardson, baritone, will perform music from Mozart’s Don Giovanni and the University Choir will present John Rutter’s hauntingly beautiful “Requiem”. Berry, on the piano, and the EMU Wind Ensemble will conclude the evening with a rousing presentation of Gershwin’s Rhapsody in Blue.