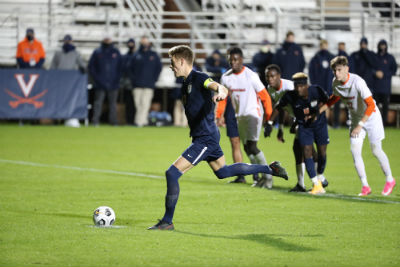 A penalty kick from sophomore Andreas Ueland in the 71st minute lifted Virginia to a 1-0 win over Syracuse Friday night at Klöckner Stadium.

The Cavaliers were awarded the penalty kick for a hand ball in the box after the referee and assistant referee conferred. Ueland, attempting his first career penalty kick, converted with ease to give Virginia the 1-0 advantage.

“With a young group, a new group today was just making sure that when we got the lead we held it,” UVA coach George Gelnovatch said. “We fought for it and you know we had that grit and grind, just to get the three points today. I think that was a pretty big thing for this young, young group to figure out how to secure that as opposed to at Notre Dame and the Pitt game. So, we’re growing.”

The victory for Gelnovatch was his 90th in ACC play. He is the fastest coach ever (25 seasons) to reach 90 ACC wins and only the third coach in the history of the league to reach the 90-win plateau.

Getting his second-straight start in goal, redshirt freshman Alex Rando made four saves and faced 14 Syracuse shot attempts. In the final 10 minutes Rando was able to punch a Luther Archimede header over the net to preserve the shutout.

Moments later it was the Cavalier defense that was able to deny an Orange shot attempt at the end line that was credited as a team save.

Syracuse held a 14-13 overall shot advantage on the night, but it was the Cavaliers who held 53 percent of the game’s possession.

Virginia has out-possessed all five of its opponents this fall.

The Cavaliers will wrap up its ACC regular season at home next Friday with their second match of the season against Virginia Tech. The contest is scheduled for a 4 p.m. start.