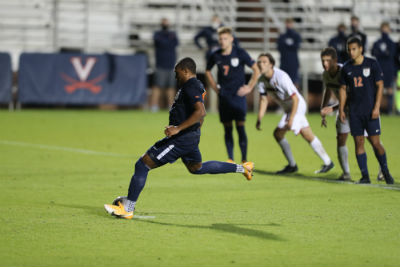 “It’s obvious we’re behind in terms of game sharpness, game fitness,” head coach George Gelnovatch said after his Cavaliers finished out a 2-1 win Friday night at Klöckner Stadium, on the strength of a PK from Philip Horton with 1:05 left in the second overtime.

Freshman Leo Afonso, who checked into the match to make his collegiate debut a little over five minutes earlier in the second overtime, drew a foul on the far side of the box to set up the game-winning Cavalier score.

Louisville (1-3-0, 1-1-0 ACC) had leveled the match and forced overtime thanks to a Pedro Fonseca strike with 47 second left in regulation.

“This team (Louisville) has four, legitimate, hard games. They have made two or three road trips to play against good teams, and it showed tonight,” Gelnovatch said.

The Cardinals had a 19-8 advantage in shots and out-cornered the Cavaliers 12-6.

Virginia broke through in the 52nd minute when its leading returning scorer from 2019, Nathaniel Crofts, was able to beat Cardinal keeper Jake Gelnovatch through his legs in a one-on-one opportunity.

Crofts was on the receiving end of a nice passing sequence by Isaiah Byrd and Joan Gibert, who were both credited with their first career assists.

Shutler made two stops in the final overtime session to give the Cavaliers a chance to setup the game-winning goal.

Virginia will be back in action on Wednesday night when the ‘Hoos take on Virginia Tech in Blacksburg. Start time is set for 8 p.m. on ACC Network.