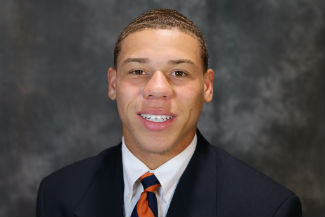 Remember Chuck Davis? Maybe, maybe not. He was the punt returner for #21 UVA for a game and a half.

And then: he was off the special teams depth chart.

Which gets us to Billy Kemp. He’s still listed at 1 on the depth chart at punt returner, and though it looked to me that he fumbled one in the second quarter of the 31-24 Week 3 win over Florida State, it didn’t go down in the official box as a fumble, and anyway, he recovered.

He has to know by now that he’s thisclose to being the next Chuck Davis.

“Yeah, there is not a long leash as a punt returner,” UVA coach Bronco Mendenhall said in his weekly presser on Monday.

Mendenhall affirmed that he still believes in Kemp as “sure-handed and confident and capable as a punt returner.”

“Chalking that up right now to an off-night. Time and consistency will tell if that was the case or not,” the coach said of Kemp’s issues Saturday night.

Kemp, a 5’9” sophomore, has six punt returns in 2019, with a long of 22, and has also contributed at wideout, with 54 yards receiving on five catches.

“He’s becoming more and more effective and integrated within our scripts at receiver and proving to be capable there,” Mendenhall said. “Yeah, I’m encouraged by the versatility, but we recruited him because of that. We thought he could do multiple things. Regardless of height, we don’t think he plays small. We think he plays big and dynamic.”