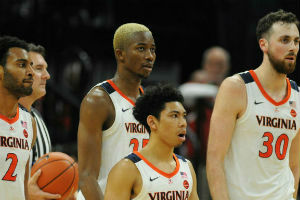 It certainly has the edge in experience. Two of this year’s Big Three are redshirt seniors, pretty much grandpas in college basketball circa 2020.

One of the old guys, Jay Huff, got married in the offseason. Dude has somebody giving him the evil eye when he forgets to take out the trash.

The young guy of the group, Kihei Clark, is actually the most experienced guy, in every important respect.

And Sam Hauser, the 6’8” sharpshooter, guy is just a baller – so much so that his teammates began their PR blitz for him to be named preseason ACC player of the year and first-team All-American last spring, when he was just the captain of the scout team, lighting them up.

I get it, it’s sacrilege to say these guys might be better than Jerome, Guy, Hunter, but …

And at 6’8”, he’s a matchup nightmare, a classic stretch four, who will take power forwards to the perimeter, who will back small forwards into the post.

Hauser will thrive in coach Tony Bennett’s mover blocker and middle triangle sets both as a screener who can pick-and-pop and a cutter floating to the arc and getting into the lane and to the free-throw line.

He spent his redshirt year focusing on conditioning, “trying to get more explosive and quicker,” both to help add to his offensive game, but particularly to improve on the defensive end, with an emphasis on “getting faster and quicker and stronger to be able to guard multiple positions more effectively and obviously help my overall game.”

The hard part for Hauser will be in the Pack Line, where he will have responsibilities at the four guarding the post and then when he’s at the three guarding perimeter players.

The last two guys to play a mix of three and four – Hunter and Braxton Key – were among the best defensive players to ever suit up for Bennett, able to guard all five positions on the floor.

Bennett referred to them as his “Swiss army knives,” and while Hauser won’t be a third coming of Hunter or Key, he knows what is expected of him.

“I think I’ve taken steps, for sure,” Hauser said. “Coming in, I was OK, and I think I’ve developed a little bit into a better defender, and that’s a credit to the work with Coach Mike Curtis and Coach Bennett as well. If I want to play here, I’m going to have to be able to play some defense, so I took that personally and individually to get better at it, and I think I have.”

Another predecessor, Anthony Gill, came in, like Hauser, with a reputation of being a plus guy on the offensive end, and Gill had earned high praise in his redshirt year – after transferring from South Carolina – from future NBA star Joe Harris.

Gill struggled through his first couple of months in his first UVA season, though, and it was all because of how hard it was to pick up what was required of him in the Pack Line.

He eventually worked it out and helped key the run to the regular-season and ACC Tournament titles in 2014, but there were fits and starts on the way to getting there.

It might be good if somebody connected those two, so Gill could impart some of his wisdom.

“The coaches hold you to a really high standard on that end,” Hauser said. “If you make one little mistake, they’re going to get on you, but I think it’s good, and it gets you better, and it makes you not want to let them down, so you’re going to play even harder on defense.

“Obviously, with the history of UVA, they’re known for defense, so I hope I can be a part of that, and we can have a great defense this year,” Hauser said.

It only feels like Jay Huff has been around as long as Tony Bennett.

The fifth-year senior was actually part of that stellar 2016 recruiting class that included Jerome, Guy and Hunter.

Saddled with the moniker “Hoonicorn” because of his tantalizing skill set at 7’1”, Huff only started to come into his own late in his redshirt junior season.

As late as Feb. 26, Huff was only getting 13 minutes in the win at Virginia Tech, in a game in which he had two points on 1-of-2 shooting and two rebounds.

He finished with an all-time flurry, just missing a triple-double in the Feb. 29 win over Duke (15 points, nine rebounds, 10 blocks), then scoring the first 17 points of the game in a win at Miami on March 4.

That’s the guy that UVA fans have been expecting to see each night since that debut back in 2017 when he had 17 points in 24 minutes in a blowout win over Austin Peay.

Seems like so long ago, that night – when he was 5-of-6 from the floor, hit both of his threes.

And really, it was. The kid who lit up the scoreboard that night is now a married man, tying the knot with Lindsay Knights in September.

Becoming the Mr. in Mr. and Mrs. Huff was only one of the highlights of his offseason. He also tested the NBA Draft waters before deciding in August to return for a grad-student year at Virginia.

“I definitely think that helps and I think getting married, honestly, you know, has matured me in a lot of ways. And it’s been it’s been great, you know, being able to go home after practice to my wife and be able to spend time with her, because there’s not a whole lot of people outside of the team that we get to spend time with during this pandemic. I’m really thankful for that.”

Kihei Clark, all official 5’9” of him, made his first impression getting under the skin of Ty Jerome with his ball-hawking defense in practice and scrimmages.

The three-star recruit that nobody had heard of was the first guy off the bench for the 2019 season opener with Towson, got 24 minutes that night, and has been a fixture in Bennett’s rotation since.

It’s not overstating things to say that Virginia isn’t the 2019 national champ without Clark, and not just because of The Play – Clark chasing down the Mamadi Diakite backtap in the backcourt, then finding Diakite for the buzzer-beating, game-tying jumper in what turned into an overtime win over Purdue that sent the ‘Hoos to the Final Four.

Clark averaged 26.8 minutes per game as a freshman, fourth-most on that veteran team, and his defense at the point allowed Bennett to slide Jerome over to the two to keep him fresh to run the offense down the stretch.

Clark, then, took the reins at point in 2019-2020, and surprised no one when he made the team his, averaging a team-best 37.1 minutes per game, stepping up his offense – 10.8 points, 5.9 assists, 37.5 percent shooting from the field and from three – all the while still playing that get-out-of-my-shirt defense that has been his trademark.

The load might be lightened a bit for Clark this season, with Top 50 recruit Reece Beekman around to back him up, run the team a few minutes a game as needed, and also play the Robin to his Batman, much as he was the sidekick Caped Crusader for Jerome two years ago.

“He’s a great player,” Clark said of Beekman. “He’s young, but he doesn’t make that many mistakes. He takes care of the ball. Defensively, he’s really solid. He doesn’t get beat off the dribble. He has quick hands in the gap, he is really good defender. We played a little bit with each other throughout the past couple months. I think we could definitely play together. We’re not ball-dominant guys, so I think it could definitely work out.”

Something that Clark will need to do more this year is be a team leader.

He was the young’un two years ago, and even last year, with Diakite and Key setting the tone as the old guys on the roster, Clark could and often did defer.

“We’ve got a lot of new faces,” Clark said, “so just being able to figure out how guys can get encouraged, and how to, how to lead certain guys – some guys like being yelled at, some guys, you need to give them a little bit of encouragement just give them, some ‘it’ll be alright, look forward to that next play just move on.’ So, just trying to learn, and I’m still trying to grow as well. I’m new to this leadership role, in a sense, so I’m just trying to figure it out as we go on, too.”