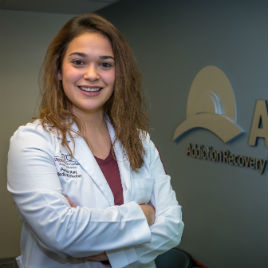 Perisa Ruhi, a fourth-year student at the Virginia Tech Carilion School of Medicine, added a negative component to episodic future thinking to determine what effect, if any, it would have on a person’s desire to quit smoking.

Ruhi found that smokers were more likely to value a future without cigarettes when envisioning future events with smoking-related illness symptoms, such as lung cancer. Her study was conducted under the mentorship of Warren Bickel, director of the Addiction Recovery Research Center (ARRC) at the Virginia Tech Carilion Research Institute and professor of psychiatry and behavioral medicine at the school of medicine, and Jeff Stein, research assistant professor at ARRC.

Previous research has found that cigarette smokers discount or devalue future rewards at a higher rate than nonsmokers, a tendency called delay discounting. This behavior may contribute to tobacco dependence because it means smokers are less likely to value the future benefits of not smoking, such as enjoying better health or saving money.

Episodic future thinking (EFT) is one of the most rapidly growing areas of research in cognitive neuroscience and psychology. It involves mental simulation of positive, personally meaningful future events, such as a wedding or graduation. By vividly imagining the event, it becomes less abstract. This concept is becoming more widely incorporated in addiction research interventions, theorizing that if individuals can imagine and appreciate the future, they are less likely to engage in their addiction.

“Adding the negative component of the smoking-related illnesses was the new part of the research that had never been done before,” Ruhi said. “It essentially changed the participant’s positive event into a negative one.”

All participants completed assessments of three measures: their cigarette craving, how much they were willing to pay for a cigarette (demand), and delay discounting.

The study showed cigarette craving diminished significantly in both groups assigned to imagine the future (with or without experiencing symptoms of smoking-related illness.

“But when we measured delay discounting, things got even more interesting,” Ruhi said.

“This was truly shocking to me because it was the opposite of my hypothesis,” Ruhi said. “After thinking about it and discussing it with Dr. Stein, it started to make more sense. If you’re imagining yourself with lung cancer, for instance, it may be too stressful to go to a future event, so the future has less value.”

Even though Ruhi may not focus on neuroscience or the treatment of addictions in her future career as a general surgeon, she was quick to emphasize their importance to all health care professionals.

“There are so many new discoveries and techniques and treatment options,” she said. “One of the things they’re realizing now is that addictions can relate to things other than drugs or alcohol – food, for example. It’s important for doctors to be aware of this, as it will increase understanding of their patients with addictions.”

Ruhi found her time in the ARRC lab to be an invaluable opportunity as a medical student interested in an academic career.

“Dr. Bickel is an amazing leader and one of the world’s leading addiction and behavioral science researchers, and Dr. Stein provided me with a wealth of knowledge and guidance,” she said. “Overall, it was just an incredible experience.”

The Virginia Tech Carilion School of Medicine is one of only a few medical schools in the country that has such an intensive longitudinal research project requirement as part of its curriculum, a fact that weighed heavily on Ruhi’s decision to come to the school.

“I’ve been able to conduct a research project from the ground up — from coming up with the idea to analyzing the data and everything in between. I’m working on getting it published in an academic journal.”

She even gave a poster presentation about her project at an international conference in Florence, Italy.

“I wouldn’t have gotten these opportunities anywhere else.”