A year ago, Andrew Gaddis, a third-year student at the Virginia Tech Carilion School of Medicine, embarked on a Fulbright research grant to learn more about supervised injection sites and other alternative strategies used to fight opioid abuse that aren’t currently supported here in the United States. Gaddis is the first student from the medical school to receive a Fulbright grant. 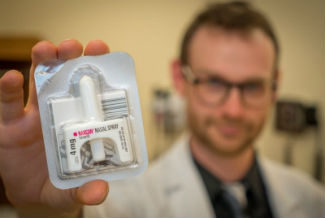 Amdrew Gaddis with Narcan nasal spray, which reverses the fatal effects of an opioid overdose

His research took him to Vancouver, British Columbia, a diverse and rapidly growing city known for its progressive culture, an unsurprising home for North America’s first supervised injection facility. Called “InSite,” the center aims to reduce the harms associated with injection drug use by allowing its clients to inject on site, providing clean syringes, giving referrals to treatment, and administering the life-saving opioid reversal agent Naloxone (brand name Narcan).

“When I wrote this grant, I had set out to work in a region that had successfully used progressive measures like supervised injection sites to curb a public health emergency in the past.” Gaddis said. “But, not long after I arrived, it became clear that I was in the midst of a current public health emergency.”

2016 was the worst year on record in terms of overdoses in the province of British Columbia, fueled by an influx of illicit Fentanyl. In the face of this crisis, the province began creating brand new supervised injection sites, called Overdose Prevention sites. Gaddis set out to observe firsthand how these sites worked to save lives.

“Initially, my expectation was to be mostly doing research, while also observing how InSite actually worked,” he said. “It was the only supervised injection facility on this continent for about 14 years. All of a sudden, there were many new pop-up sites, and I found myself volunteering every chance I could get.”

He noted that spending time in Vancouver as a first responder during the Fentanyl crisis made him even more certain of the urgency of these types of nontraditional harm-reduction programs. Since opening these new sites, the province has seen reductions in the rate of opioid overdose.

“In the U.S. there’s just no way to reach these patients at the moment of overdose,” Gaddis said. “I went from never having actually seen an overdose to being there for 10 or so per week. Otherwise, this happens when people are alone, unsupervised, unsafe, and outside of controlled settings.”

According to statistics from the Virginia Department of Health, Southwest Virginia has the highest mortality rate for prescription opioid overdoses in the state. See sidebar (Opioid Crisis Close to Home) for more information.https://vtnews.vt.edu/content/vtnews_vt_edu/en/articles/2017/09/vtcsom-gaddisresearch0/jcr:content/content/adaptiveimage.transform/xl-medium/image.jpg

In addition to acting as a first-responder, Gaddis completed research with the British Columbia Centre on Substance Use, focusing on gathering data from three large existing cohorts of injection drug users in Vancouver.

The first study he worked on was published earlier this month in the Journal of Substance Abuse Treatment. The study found that a significant number of people who accessed the site also accessed detox services on site. Further, these tended to be individuals who engage in high-risk behavior and who are traditionally resistant to treatment.

“I often hear the sentiment that supervised injection sites encourage drug use,” Gaddis said. “I was attracted to this project because it helps show that these sites actually encourage treatment.”

Gaddis has several other pending projects that utilize these same cohorts and closely align with his ongoing research at the medical school. One focus, with William Rea and David Hartman, both associate professors of psychiatry and behavioral medicine, is on opiate replacement therapy. Another, with Cassandra Mierisch, assistant professor of orthopedic surgery, is on opioid stewardship. Both teams have recently submitted articles for publication.