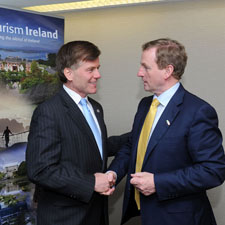 Gov. Bob McDonnell met Wednesday with the new prime minister of Ireland, Taoiseach Enda Kenny, to discuss economic development and trade between Virginia and Ireland. He was joined at the meeting in Washington, D.C. by Secretary of Commerce and Trade Jim Cheng.

Ireland is now Virginia’s 10th largest agricultural export market per new 2010 figures. The top three export products are animal feed ($47 million worth of products); soybeans, grains, fruits ($6 million); and, hardwood lumber and miscellaneous wood ($1 million). In addition, approximately $45,000 worth of Virginia made beverages, including Virginia wines, were exported to Ireland in 2010. This is mostly new business started in the last two years.

“Virginia has a strong and longstanding trade relationship with Ireland, and that relationship supports great jobs for our citizens,” McDonnell said. “Ireland is one of the top recipients of agricultural exports from the Commonwealth, jumping from 16th in 2009 to 10th in 2010, and they rank 23rd in total exports from Virginia. As this administration continues to place a greater emphasis on the export of Virginia’s goods and products around the world, Ireland will remain an extremely important trading partner.”