McDonnell: Loyalty oath not in the best interests of GOP 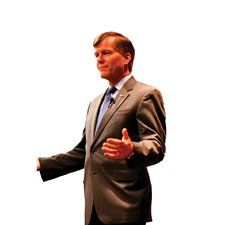 Gov. Bob McDonnell issued the following statement this morning regarding the proposed “loyalty oath” that all voters seeking to participate in the March GOP presidential primary in Virginia would be required to sign in order to cast a vote.

“Over the past few days I have reviewed the issue of the proposal that voters sign a loyalty oath as a requirement for participation in our upcoming GOP presidential primary in March. While I fully understand the reasoning that led to the establishment of this requirement, such an oath is unenforceable and I do not believe it is in the best interests of our party, or the Commonwealth.

“The effect of the oath could be one of diminishing participation in the primary, at a time when our party must be expanding its base and membership as we head into the pivotal 2012 general elections this fall. For these reasons, I urge the State Central Committee to rescind the loyalty oath requirement at its upcoming meeting on the 21st.

“It is true that for political parties to remain viable they must have some means by which to control their own nomination processes. I know the loyalty oath was proposed as a possible good faith solution to this issue in this primary election, but there are other ways. I would support legislation to establish voluntary party registration in Virginia. Such a reform to our electoral system would eliminate the need for any oaths or pledges and greatly simplify the nomination process in the Commonwealth.”