Matthew Joseph La Porte to be honored with Airman’s Medal for actions on April 16, 2007 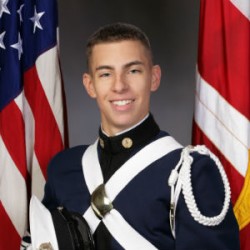 The U.S. Air Force will posthumously honor Matthew Joseph La Porte with the presentation of the Airman’s Medal on April 9 at Westview Cemetery, 723 E. Roanoke St. in Blacksburg.

La Porte was one of 32 students and faculty members who lost their lives on April 16, 2007, and is being recognized by the Air Force for his heroic act credited for saving lives that day.

The Airman’s Medal is awarded to any member of the U.S. armed forces of the United States or of a friendly nation who, while serving in any capacity with the Air Force, have distinguished himself or herself by a heroic act, usually at the voluntary risk of his or her life but not involving actual combat.

La Porte was a member of the Virginia Tech Corps of Cadets Class of 2009 and Air Force ROTC. He played tenor drum in the regimental band, the Highty-Tighties, and was part of the cadet jazz ensemble, the Southern Colonels. La Porte was also a member of the highly competitive and physically demanding Armed Forces Special Operations Preparation Team. He was majoring in political science in the College of Liberal Arts and Human Sciences and planned to serve in the Air Force as an intelligence officer upon graduation.

The entire Corps of Cadets will march from the Upper Quad on campus, departing from Alumni Mall and then through downtown Blacksburg, to the cemetery. The cadets will begin marching at 3:30 p.m. with the formal presentation of the medal to be held upon their arrival.

All are welcome to join the Corps of Cadets, Air Force ROTC, alumni, friends, and family as they join together to honor La Porte.

The Virginia Tech Corps of Cadets has produced military, public, and corporate leaders since the university was founded in 1872. It is one of just two military corps within a large public university. The corps holds its members to the highest standards of loyalty, honor, integrity, and self-discipline. In return, cadets achieve high academic success and a long-lasting camaraderie with fellow members. Virginia Tech, the most comprehensive university in Virginia, is dedicated to quality, innovation, and results to the commonwealth, the nation, and the world.