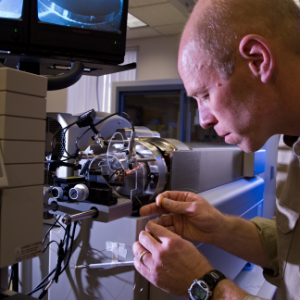 Rich Helm, associate professor of biochemistry, manages the Mass Spectrometry Research Incubator. The instrument pictured is used by Virginia Tech researchers to uncover mysteries about everything from bed bug pesticide resistance to how the nectar of a flower could provide a link to understanding pollinator attraction.

Assessing meat quality and bed bug pesticide resistance are two very different endeavors, but one thing these activities have in common is an extraordinary instrument — the Mass Spectrometry Research Incubator.

The device lets scientists in Virginia Tech’s College of Agriculture and Life Sciences peer into the very biological processes of lower organisms themselves — way beyond the footprint of DNA mapping.

Rich Helm, an associate professor of biochemistry who manages the mass spectrometer lab, measures proteins and metabolites — the drivers of biological processes — to get a more complete picture of how genes interact with each other. He has worked with researchers around campus on issues that cut across disciplines.

“While DNA is a blueprint of what may be,  proteins and metabolites are the real workhorses of biological processes,” said Helm.  “When you go to the store to purchase a farm-based product, you are buying the products of metabolism, which are proteins and metabolites,  and also the value-added agricultural products that are bought and sold on a daily basis.”

To better understand the key processes associated with various organisms, researchers across campus from different colleges use the facility to gain a clearer understanding of their particular system.

In the Department of Animal and Poultry Sciences, professor and department head Dave Gerrard has used the mass spectrometer to determine how stress and other factors might affect muscle tissue in animals by measuring protein levels. Stress can affect protein composition, minerals, and vitamin content, causing meat to become tough, dark, and dry. Research using the mass spectrometer can ultimately assist producers in preserving the integrity of their meat at harvest.

The mass spectrometer was also recently used to discover how certain strains of bed bugs acquired pesticide resistance. The discovery affects a $250 million industry dedicated to ridding houses, dorms, and hotel rooms of the pests.

Associate Professor Zach Adelman, Assistant Professor Troy Anderson, and Professor Dini Miller, all in the Department of Entomology, used mass spectrometry to determine several factors that contributed to the resistance. One factor was the composition of extracts from the surface of the cuticle on the bed bugs. The pesticide-resistant bugs actually had harder cuticles, which protected them from chemicals. The team also found other physiological factors, such as a mutation in the sodium channel gene, the target for popular consumer insecticides, which makes the bed bug nervous system partially resistant to the toxic effects of insecticide treatment.

Another faculty member is using the mass spectrometer to uncover the mysteries of evolutionary biology.

Plant pathology, physiology, and weed science Assistant Professor David Haak has partnered with a graduate student from the University of Indiana to study pigmented nectar from a South American flowering plant in the genus Jaltomata.

The plant is closely is related to tomatoes and potatoes and produces a nectar that could be a clue about the evolutionary history of pollinator attraction.

Nectar from flowers in the Jaltomata genus ranges in color from red to orange.

“If you’re producing both a nectar reward and pigmented petals, there may be an ecological cost associated with their production. Pigmented nectar could represent an evolutionary stable alternative that has reduced ecological costs,” said Haak.

For now, with the aid of the mass spectrometer staff, Haak has identified a single compound that does not exist in Helm’s current library of compounds.

Still, it’s a step towards perhaps further funding to find out more clues.

“We could not have gotten this resolution — in particular the precise masses of the pigment compound — without the staff and resources available in the mass spectrometer lab,” said Haak.

Funding for the mass spectrometer is provided in large part by the Department of Biochemistry and the Fralin Life Science Institute. Other key contributors include the Institute for Critical Technology and Applied Scienceand the departments of Animal and Poultry Sciences; Biological Sciences; Chemistry; Human Nutrition, Foods, and Exercise; and Plant Pathology, Physiology, and Weed Science.