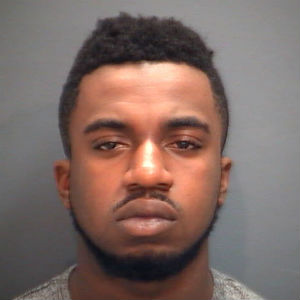 The Waynesboro Police Department arrested a Maryland man on several counts of counterfeiting after he and an unidentified accomplice passed phony $50 bills at Waynesboro stores over the past week.

Officers caught Tavon Daniel Foster, 18 years old of Landover, Monday evening after a short foot chase when they tried to detain him for using counterfeit $50s to make purchases at Walmart, 116 Lucy Lane, on at least two occasions.  The store’s Loss Prevention staff alerted officers to his return to the store and illegal activity.

On December 21, 2015 at approximately 6:45 PM, officers responded to the area near Walmart and Martin’s for a report of a two men making small item purchases with counterfeit money. While police officers were en route, they were notified that Walmart Loss Prevention officers were pursuing the two suspects in different directions.  One suspect eluded the LPO by getting in a waiting vehicle by Ruby Tuesday’s and fleeing.  The other suspect was on foot being followed by another LPO near the front of Martin’s.

Police officers were able to find this suspect and attempted to detain him but he ran to the east side of the Martin’s.  He eventually surrendered but denied any wrongdoing.  Loss Prevention Officers identified him as just having been in Walmart making several purchases and with counterfeit currency.  They also said he had come in over the past week doing the same illegal activity.  Before his surrender, Foster tried to ditch several bogus bills on the Martin’s parking lot but they were found by a store employee and given to officers.

During the course of the investigation, officers determined that Foster and likely his accomplice were involved in passing funny money at the Waynesboro Target, 811 Town Center Drive, on December 17, 2015.  Also, other Walmart stores in Lexington, Roanoke, Staunton, Harrisonburg and Charlottesville had similar counterfeit bills used in fake purchases recently.  The Waynesboro Police Department is working with law enforcement agencies in those jurisdictions to see if Foster is involved and in trying to identify the other suspect(s).

Presently, Foster is facing seven charges: six felonies for Knowingly Passing a Forged Currency for Monday’s Walmart incident and the Target incident on December 17.  He is also facing a misdemeanor charge of Providing a False Identity to a Law Enforcement Officer.  He is being held without bond at Middle River Regional Jail.