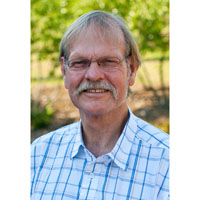 Ed Martin of Akron, Pa., has been named director of the Center for Interfaith Engagement at Eastern Mennonite University. The Center – earlier referred to as “Abraham’s Tent” – provides space for people from a variety of faith traditions to dialogue and collaborate on areas of common understanding.

“Ed’s proven track record of relationship-building in places as diverse as Indonesia and Iran makes him a perfect fit for this role,” says EMU provost Fred Kniss. “We are grateful for Ed’s leadership, building on his long-term commitment to engage people of all faiths in pursuit of common goals.”

Martin most recently served with American Friends Service Committee as the Quaker International Affairs Representative for Iran, building connections between Iranian institutions and the United States, and providing resources for public education and advocacy regarding Iran in United States.

Prior to that appointment Martin worked for 18 years with the international aid and development organization Mennonite Central Committee as director of programs for Central and Southern Asia, as well as the Middle East. Early in his career, he worked at the International Irrigation Management Institute in Sri Lanka.

Martin has a bachelor’s degree in engineering from Stanford University and a master’s of public administration and PhD in agricultural economics from Cornell University in Ithaca, N.Y. He has also studied at Associated Mennonite Biblical Seminary, Elkhart, Ind., and completed courses with EMU’s Summer Peacebuilding Institute (SPI).

The Center, begun in 2008 as a feasibility study, grew out of decades of Mennonites’ practical experience working across deep religious divides around the world. Through this work, “Mennonites have created an international network of cooperative relationships and pragmatic engagement with highly diverse religious communities and leader,” says Martin. “We hope to facilitate safe respectful relationships as we seek a deeper understanding and also struggle with our differences.”

“We will continue to build relationships among the three Abrahamic faith traditions right in our own community,” says Martin. This includes facilitating student visits to the local mosque and synagogue and continued hosting of the annual summer Interfaith Peace Camp for children from the three local faith communities.”

The Center consults with a local steering committee and an international advisory group, both of which consist of persons representing the three Abrahamic faiths. Gretchen H. Maust, associate director, joined the Center staff during the feasibility study phase.

EMU is a leader among faith-based universities offering undergraduate, graduate and seminary programs that emphasizes peacebuilding, cross-cultural understanding, sustainability and service to others.

More on EMU’s Center for Interfaith Engagement can be found online at www.emu.edu/interfaith. Email interfaith@emu.edu or phone 540.432.4674.