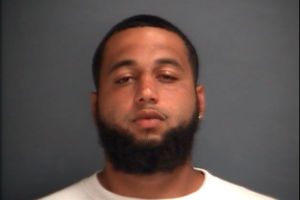 Landon Obrien Clark, 25, faces felony charges for malicious wounding and use of a firearm in the commission of a felony, and a misdemeanor charge of reckless handling of a firearm.

Clark turned himself in at the Waynesboro Police Department Tuesday morning and was subsequently released on bond.

Original post: June 3, 12:44 p.m. Waynesboro Police have determined that a man injured in an altercation at the Sheetz on West Main was not the victim of a shooting, though a shot was apparently fired during the incident.

The call came in to the Waynesboro Emergency Operations Center around 9:20 p.m. Sunday, with the report being that a shooting had taken place in the parking lot of the convenience store.

The victim was ultimately released from the Augusta Medical Center several hours later, after receiving treatment for injuries that were related to an assault, not a gunshot wound.  It has been determined that a firearm was discharged during the course of the assault that occurred on the parking lot and that the bullet struck the Sheetz building, however no one was injured as a result of the discharge.

The investigation continues and more information will be released at a later time.  If anyone has information pertaining to this incident, contact Sgt. Alyssa Zullig at 540-942-6511.