Mamadi Diakite: Growing into his new role as the man 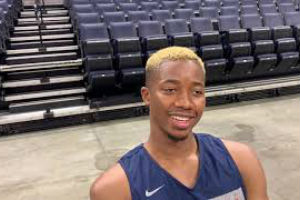 Mamadi Diakite himself didn’t know how to characterize the impact that his decision to take a feeler on the NBA this past spring had on his game.

The early returns: he’s a different player, without question.

Diakite had 19 points and 13 rebounds in defending national champion UVA’s 65-34 win over James Madison on Sunday, but it has how, and when, he did his damage that was telling.

JMU coach Louis Rowe, seeing that Virginia had shot 4-for-25 from three-point range in its 48-34 win at Syracuse on Wednesday, went zone after the first media timeout, basically daring the ‘Hoos to hoist jumpers.

And, they did, connecting on 3-of-14 from long-range in the first half, and as shots were clanging off rim, when they weren’t missing entirely, the Dukes, picked fourth preseason in the CAA, were making a game of it.

It was Diakite who took over. The 6’9” senior, a breakout performer in UVA’s 2019 national title run, had 16 points and six rebounds in the first half, hitting an early three, scoring on short jumpers, getting to the rim.

“As one of the leaders, I wanted to make a statement and show everyone that we are coming out and we’re going to play hard and give them our best,” Diakite said after the 65-34 win had been put into the books.

He finished 8-of-16 from the field in 29 minutes, showcasing a game that is much more multidimensional than what we saw out of Diakite in the title run, when his main contributions on offense involved setting screens and occasionally scoring in the post.

After his spring auditioning for NBA teams, Diakite has added perimeter and dribble-drive skills to his game, and is improved finishing at the rim.

“I worked really hard,” Diakite said. “Going through the process and working with Coach Bennett and staff. They have helped me a lot with my shot. I made many adjustments until I was able to find the right one, and I stopped with that.”

“I think he’s great in space, moves really well, comfortable at his position, at 15-17 feet, opens the game with a three,” Rowe said. “He rips and drives, great finisher, smooth, has good feel. What do you want anymore? He is very, very good, he is a very talented young man. He has it all. I hear Serge Ibaka type stuff, you know? And it’s the truth, he has that type of package.

“He’s coming into his own. I think he blossomed last year around the big three. He got confidence, he worked his way into being a guy that they count on, hit the shot to win the game for them. I was a player once, too. I understand the energy that is behind that, you gain more and more confidence. That is a very confident and talented guy right there.”

With his backcourt still a work in progress, UVA coach Tony Bennett knows he needs Diakite to provide scoring punch.

“We need his offense and his ability to one dribble and pull up or post moves or shoot the rhythm shots,” Bennett said. “I encourage that and want that, and he did a great job against Syracuse, as Jay (Huff) did, and I’ve watched him, and he’s now in an opportunity in his fifth year to give us a threat on the inside and outside as well.”