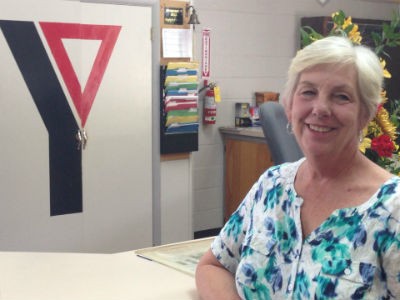 The Waynesboro YMCA plays an important role in the local community in promoting physical fitness. Maggie Van Huss sees the Y being able to play a bigger role in promoting a broader fitness role.

“The demographics of our community have shifted so that we have more of a middle-age and older population. We do a pretty good job of programming for that, but I think there are some avenues for programming that we need to explore, not just from the physical-health side, but from the social and educational side as well,” said Van Huss, the new director of staffing and strategic planning at the Y.

Van Huss came on board with the Y this summer after a 30-year career in the Waynesboro Public Schools system, where she had served most recently as the director of student services.

She’s already left a mark on the YMCA with her push for staffers to tidy up their office spaces.

“This is an old building, so much like when a person gets older, it can have some aches and pains and creaks and groans and whatnot, but that doesn’t mean that we can’t keep it as spiffy as possible,” said Van Huss, who is also leading a push with the staff and the board of directors to identify what the YMCA is doing well in terms of its programming, and where it may be able to add new items to the menu of community-service options.

“I have been very, very welcomed here by the staff. They’ve been very gracious in allowing me to partner with them in their respective areas,” Van Huss said. “I have felt very supported by the executive director and the board of directors as I’ve shared some ideas on what we might be able to improve on, and things we need to keep the same.

Van Huss envisions the YMCA becoming a gathering place for the Waynesboro community.

“It already is a gathering place for our kids, with Friday night basketball, all the swimming programs, the afterschool and child-care programs. We need to have threads all the way through that will hit every age group in our community,” said Van Huss, who feels the Y can “be about more than just physical health.”

She told the story of a chat with a Y member who mentioned that she likes playing Scrabble, and suggested the formation of a Scrabble club that could get together at the YMCA.

The concept could extend to book clubs, bridge clubs – “the possibilities are endless,” Van Huss said.

“There’s lots of research that supports the idea that when you not only take care of yourself physically, but also in those other areas, that you do marvelous things for your health in general,” Van Huss said.

“This gives us an opportunity to include people in a variety of activities, and for the Y to play a bigger role in the community,” Van Huss said.

Van Huss wasn’t necessarily looking to make a career change, but she feels like she was led to the YMCA, and she looks forward to being able to play a role in its future growth and success.

“I looked at this position as a gift and opportunity to take some skills that I have and offer them to an organization that I’m deeply invested in. It just all lined up, and karma, fate, whatever, it intervened. I just decided that this is where I’m supposed to be, and I’m very happy to be here,” Van Huss said.