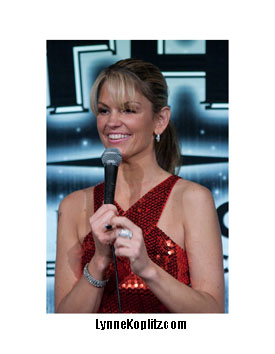 Lynne Koplitz wasn’t even back in Staunton yet, and already her mother was working her.

“I get off the plane, and my mother just started in with what I wasn’t allowed to talk about,” said Koplitz, a standup comedian who is back in her adopted hometown for a benefit show for the Staunton Augusta Art Center at The Visulite in Downtown Staunton set for Thursday evening.

Koplitz, currently filming “Joan Knows Best” with Joan and Melissa Rivers, and coming off a two-year run on the IFC TV series “Z Rock,” also co-starring Joan Rivers, spent a couple of years in Staunton after college when her mother and aunt settled here.

The New York native moved back to the Big Apple to pursue a career in acting admittedly a bit late in life, at 28. “But Jesus didn’t start until he was 33. I think it’s alright if you start following your goals late,” said Koplitz, whose break into show business came at the urging of a group of friends at a production company where she’d landed a job, who not only insisted that she go into standup comedy, but called around and found her her first gig at an open-mic night.

It wasn’t exactly all that glamorous – she had to pay $5 to get five minutes of mic time. But she did enough in that five minutes to get the attention of the manager of the club, and in the process learned the meaning in the world of comedy of the term barking.

“She said, Listen, you can come here on the weekend, and you can bark. I had no idea what barking means. That’s when you go like into Times Square, and you pass out flyers for the club, and then they give you stage time,” Koplitz said.

Within a year, she had a manager and agent “and doors opening for me that I had been beating on as an actress.”

“It was just proof that when you’re doing what you’re supposed to be doing. I was in the right neighborhood, but on the wrong street, for a good 10 years. I took it as just divine intervention that that was where I was supposed to be,” Koplitz said.

You’ll hear Koplitz talk a lot in her act about spirituality, but as the bill for her show at The Visulite makes clear, there’s, you know, mature content in there, too.

“Part of it is, I perform all over the country, and I perform in nightclubs a lot, and as a woman, in order to deal with people who are drunk in nightclubs late at night, there’s a certain amount of saltiness that you just acquire to gain control. And just the way television and movies are now, people have come to expect some of that,” Koplitz said.

Funny how life turns. The actress who moved to New York to break into TV became a comedian who is now acting on TV, but at heart she will always be the comedian who identifies with audiences by being authentic.

“Early on in comedy, I started realizing, i should just tell these people what I’m thinking, like, if I’m nervous, I should just tell them that I’m nervous. It ended up working to my benefit that I could just be honest with the audience,” said Koplitz, who grew up idolizing Carol Burnett and Joan Rivers, who has become a mentor through their work together.

Their first meeting was memorable for Koplitz – maybe not so much for Rivers.

“I’ve met many celebrities, people who would make people nervous. Joan was the one that had me – I was so nervous. They brought me in, the producers, everything, we were going to shoot together that day. And the minute I met her, I did the corniest thing a person can do. To this day, I’m embarrassed about it. I bowed. You know, how when somebody meets the queen? I bowed. And she took one look at me, and she said, I’ve never seen a camera take weight off of someone. The whole room was silent, and I just burst into laughter,” Koplitz said.

Koplitz admits to being nervous coming back to play Staunton.

“I don’t always get nervous. I’m nervous when there’s rules,” said Koplitz, explaining the fine line that a comic walks on the road.

“On the road, the rule of thumb is, you want to crack on places, but people live here. They love their town, and rightfully so. So I need to walk the line of poking fun and not hurting feelings and not making people angry,” Koplitz said.

“There are some real differences to living in New York and then coming back home to Staunton. I plan to draw on some of those,” Koplitz said.

A reception with cash bar begins at 7 p.m. followed by the performance at 7:30 p.m. The show will include adult content and is not intended for children. The admission ticket price is $25 and tickets may be purchased online at www.saartcenter.org, by telephone at 540.885.2028, or in person at the R.R. Smith Center for History and Art at 20 S. New Street.