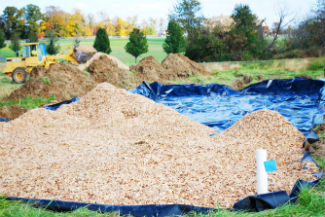 This is a bioreactor under construction on Fair Hill Farm, Kent County, MD. The pit is being filled with woodchips.

As crews work to bring down damaged ash trees at Westover Park in Harrisonburg, another project benefiting from the destruction caused by the emerald ash borer moves closer to fruition.

The City of Harrisonburg has partnered with nonprofit Ridge to Reefs to install a woodchip bioreactor at Purcell Park, using funding from a National Fish and Wildlife Foundation grant. Ash trees removed from Westover Park due to beetle damage will be turned into woodchips for the project.

Woodchip bioreactors are designed to mimic wetlands and convert nitrate-nitrogen in the water to harmless nitrogen gas (which makes up 78 percent of the air we breathe). Water is diverted through a large pit filled with woodchips, and the woodchips act as a media for bacteria to grow and denitrify the water. The pit is capped and covered with soil and grass, allowing it to blend into the landscape.

Nitrogen is a source of pollution in surface waters of Virginia and the Chesapeake Bay Watershed. Excessive nitrogen causes large algae blooms in river and streams. When algae blooms die, they decompose, which decreases oxygen levels in rivers and can cause fish kills. The City of Harrisonburg is required to reduce nitrogen levels as a part of the Municipal Separate Storm Sewer System (MS4) permit.

“The woodchip bioreactors we’ve built typically remove 90 percent or more of the nitrate that enters the practice,” Drew Koslow, restoration ecologist for Ridge to Reefs, said. “We have estimated the cost per pound of nitrogen removed to be $7 to $10, which makes bioreactors tremendously cost effective.”

The Purcell Park woodchip bioreactor is scheduled be completed in August. It will be installed above the pond, which collects water from Siebert Creek from a pipe and discharges water into Blacks Run below the pond. The bioreactor will divert water in the pipe to the bioreactor, denitrify the water, and allow it to continue to flow into the pond. This denitrified water will reduce the algae blooms that have plagued the pond in the past. It also will reduce the amount of nitrogen headed downstream into Blacks Run.

This project will not only reduce nitrogen levels in Blacks Run, it also will utilize ash wood from emerald ash borer-damaged trees.

“I have been really excited about this project and the fact that we are turning a really bad situation with the emerald ash borer and the loss of our ash trees into a water quality improvement is the icing on the cake” Wes Runion, environmental specialist for the Harrisonburg Public Works Department, said. “Not only is this project benefiting water quality in our local pond and Blacks Run, but it is ultimately improving the Chesapeake Bay.”

The use of woodchip bioreactors has primarily been limited to the agriculture sector, where they are used to denitrify agriculture wastewater in the Midwest. This project will be one of the first to treat surface runoff and stormwater in Virginia.