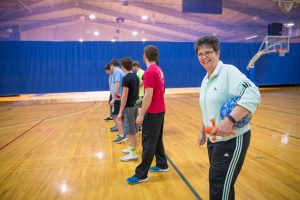 This smile captures Sandy Brownscombe’s joy while teaching, a quality that her students often commented on in their evaluations.

When Sandy Brownscombe arrived on the Eastern Mennonite College campus in 1978 for a job interview, she had no idea she would help to shape the physical education, teacher education and athletic programs for the next 40 years.

Nor did she have any idea just how many students she would teach, advise, coach and mentor at the university: Considering the number of courses she taught each semester as well as her class sizes, Brownscombe probably taught an estimated one-third of the student body each semester. For 15 years with the MidValley Consortium, she was the field placement coordinator for what amounts to several hundred practicum and student teachers.

So the likelihood that any student over the past 40 years graduated without relating to Brownscombe in some capacity is pretty slim.

That legacy was honored earlier this month during a reception attended by colleagues.

One of those colleagues is also a former student: Roger Mast, associate professor of physical education and men’s soccer coach for the past 27 years. He noted that the opportunity to work alongside a passionate, committed and welcoming colleague who continuously “reflected and improved her own teaching practice is a gift we’ll cherish for a lifetime.”

Brownscombe was the second non-Mennonite faculty member, and the first female non-Mennonite, to be hired, noted Director of Athletics Dave King.

This last coaching term is notable, says King. If Brownscombe is not the first woman to coach men’s sports in the NCAA, she is certainly among the first. That she did this at a private Christian college is also notable.

In the record books, Brownscombe is No. 1 in wins for field hockey and men’s volleyball, and second in career wins for women’s basketball (notably, she has been the longest-serving coaches in the first two sports, by several years; current women’s basketball coach Kevin Griffin logged his 12th year, to equal Brownscombe service and exceed her wins record, just this year).

She is one of three coaches inducted in EMU’s Royals Hall of Honor, with her mentor Miriam “Mim” Mumaw and Eugene Hostetler.

“You have pioneered change or embraced change at every turn in our athletic and physical education program at EMU, so thank you for being a trailblazer,” President Susan Schultz Huxman said. “That takes energy, conviction, confidence and steady optimism and faith in a university’s future.”

In April 2018, the EMU Board of Trustees honored Brownscombe as the first physical education faculty member to receive professor emerita status.

Reflecting on her career, Brownscombe said in a later interview that she was most proud of her record as an academic advisor, helping students to create a smooth and efficient pathway to timely graduation – a challenging task considering the practicum and student-teaching requirements for physical education and teacher education.

Her student evaluations highlight her strengths as a teacher. “I tried every semester to be better than the semester before,” she said. “That was very important to me, to get better at my work, to be a better teacher.”

For many years, all of the time-consuming coaching responsibilities – such as state-wide and regional recruitment, planning for and managing practices, driving the team to competitions – were accomplished on top of a full teaching load.

Though Brownscombe says she thinks back on that time and is still amazed at her own resilience, she says she felt a strong responsibility to model to her students how to balance the two roles. For all students, it was important to see a female coach in a leadership role.

“For the first half of my career, I was a coach and teacher, and I felt it was really important to model those dual roles to health and physical education majors because that was often the role they were going into,” she said.

Helping all teachers to be better teachers

With various teaching responsibilities in both teacher education and physical education departments, she was field experience coordinator for 15 years, representing EMU on the MidValley Consortium for Teacher Education from 2000-2015.

In this capacity, she helped to develop an innovative new model, which emphasized co-teaching between the P-12 classroom teacher and the preservice teacher.

“When the new Standards of Learning requirements were introduced, local principals were concerned about how student teachers might impact learning,” she explained. “The model then was that the student teacher spent a few weeks observing and then took over the classroom while the regular teacher stepped out.”

In the MidValley Consortium role, Brownscombe developed and shared research and knowledge gleaned about all aspects of teacher education at various conferences. Some of these topics included:

Brownscombe was on the board of directors from 2011-16 of Association of Teacher Educators (ATE), a national organization that represents over 700 colleges and universities, over 500 major school systems, and the majority of state departments of education.

Brownscombe also co-chaired the ATE’s Commission on the Development of/and Preparation for Teaching the Whole Child, and was a four-year member of the association’s standing committee on technology and the future of teacher education.

With the Virginia Association of Teacher Educators, during 20 years of membership, she served as president from 2007-09, which included two-year terms before and after as president-elect and past president. She was the higher education delegate from 2011-12.

She was also active in leadership roles for the Virginia Association for Health, Physical Education, Recreation and Dance (VAHPERD), and served as one of the lead teachers at James Madison University’s Content Teaching Academy.