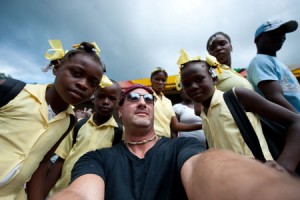 From the moment the plane that brought him back from Haiti in 2010, Kevin Blackburn has been pining to go back.

“You read about writers and photographers who travel and search for a place that just pulls at their heartstrings, that sort of cultural touchstone. I love shooting in Appalachia, the work I’ve done there. But if I had to say, Haiti is that place for me – the people, the culture, just everything about it,” said Blackburn, a Waynesboro-based commercial photographer who is leaving for a two-week trip to Haiti as part of a mission trip organized by GCOM International, a faith-based group that coordinates work by photographers and videographers to create images and videos that can be used to draw attention to charitable efforts ongoing in locations around the world.

Blackburn, who counts among his commercial-photography clients Fishburne Military School in Waynesboro, will also use the trip to connect with an FMS alum, Greg Kenol, who will help coordinate the donation of clothing and other supplies from Fishburne to schools in Haiti.

In addition to his photography work, Blackburn serves as a fill-in in the commandant’s office at Fishburne, tapping into his own experiences as a military veteran to mentor cadets.

“I’ve been blessed over the years to be able to build up a good business in corporate and commercial photography. My career started in newspapers, in newspaper work, the work that you do impacts people’s lives, and more often than not, it’s generally very positive, so you’re giving back to the community that way. I grew up in a family of people who give back. I served in the military. I’ve volunteered with the rescue squad. My business is successful, and I love what I do, but that part of being able to give back is missing,” Blackburn said.

The focus from the photography standpoint for Blackburn over the next two weeks will be on capturing images of what people are doing to help improve daily life today and build toward a better future for Haitians.

“People don’t want to see the bad stuff. It doesn’t shock them into wanting to make a change. It’s the good stuff, the positive things going on, the people who are there making a difference. You have to document all of it, but what makes people want to give and provide support is seeing what the result of their giving does for people. It’s not as much, I need to give because this is terrible. It’s, I need to give so that this can continue,” Blackburn said.