Live, in-person sports in 2020: A revelation, if you can manage it 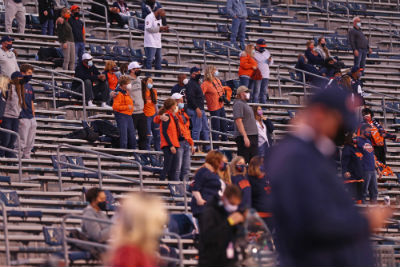 I kept expecting it to be “weird” to be at a college football game with 250 people – actually, less – in the stands.

It was … but only briefly.

The backdrop: my first in-person game at UVA this 2020 season.

Props to Jim Daves and his media-relations crew for getting me in, seated, properly outfitted.

The “weird” moment of the day for me was when I went full-on news guy and counted the number of fans in the stands in front of me, as the national anthem blared over the loudspeaker.

I got to 167, though I assume the final number would have been a tick higher, with stragglers.

That I could count everybody in front of me in a 60,000-seat stadium is, yes, odd, borderline “weird.”

But, honestly, once the game got going, I pretty much didn’t pay attention to the fact of the sea of empty seats.

OK, it was “weird” whenever it was eerily silent during injury timeouts, of which there were more than quite a few.

The game-ops people, otherwise, did a nice job of injecting loud music into the stadium loudspeakers during the media timeouts.

The game in front of me: normal.

Yeah, not normal, no noise on the big plays.

There were a lot of big plays – a 90-yard TD pass from Brennan Armstrong to Lavel Davis Jr., a touchdown for the good guys on the final play of the first half, a double-pass TD in the third quarter.

Scott Stadium would have gone nuts on all of the above, and more – the sacks on third downs, the offense picking up first downs, to the PA guy’s call, “And that’s another UVA …”

It was awkward when he had to then finish … “first down!”

The music echoed off the empty stands.

When an injured player would get up and begin to trudge off the field, I could hear individual people in front of me clapping.

And then, there’s the press box part of things.

I sat in my normal seat, a few chairs to the right of the 50, first row, not far from the UVA radio booth.

Also unusual: I could hear every word Dave Koehn was saying.

At one point, he emphasized the point of how quiet it was in the stadium by literally dropping his pen and saying, “That sound you heard was my pen dropping.”

After the game, none of the reporters seated in my vicinity had to walk from the press box to the interview room in Bryant Hall to interview Bronco Mendenhall and the UVA players.

We all sat at our seats, and were connected to the postgame interviews via Zoom.

Personally, I hope that aspect stays with us post-COVID.

Nor do I miss having the media-relations interns inundate us with endless reams of paper stats.

I had long since gone over to relying on the live web in-game stats.

I missed the energy from the fans. Not going to lie there.

Other than that, it was a college football game.

The last time I was at a live athletics event, at the ACC Tournament, the teams warmed up, went through layup line, and left the court.

I’ll take what I got, and I’m absurdly happy with it.