Lights, camera: Zeus brings Waynesboro back to the movies 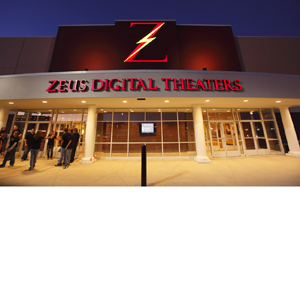 Crews had just finished putting up the sign on the front of the theater. It was time for the big opening that Brett Hayes had been planning for months.

“I just wanted to see a movie,” said Hayes, a day before the Oct. 8 opening at Zeus Digital Theaters, the eight-screen, $8 million, 1,100-seat, digital cineplex on Lew Dewitt Boulevard in Waynesboro.

It was T-minus 24 hours to the opening, and there was still plastic on the seats in the auditoriums, construction ongoing in the lobby, pavers out front pouring the parking lots.

Hayes had had three hours of sleep the night before, “and I don’t think I get any tonight,” said Hayes, who began construction on the theater back in December with an aggressive schedule aimed at a fall opening.

He needed every minute, as the frenetic pace of work in the final week to get things ready for opening night demonstrated. That opening night didn’t quite go off without a hitch – Hayes let some early moviegoers in for free because of an issue with the computers controlling ticket sales; but everything else was as advertised.

Read the rest of this story on TheNewDominion.com.