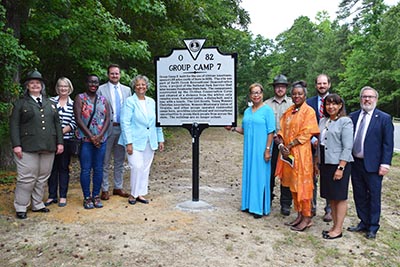 State representatives today dedicated a historical highway marker issued by the Virginia Department of Historic Resources that recognizes a camping area created for African Americans during the late 1930s.

“This weekend we celebrated Juneteenth and today we unveil the newest historical highway marker honoring ‘Group Camp 7’ here at Pocahontas State Park,” said Lieutenant Governor Winsome Earle-Sears. “I am grateful for the ongoing work that is being done in every corner of the Commonwealth so that we can learn from the past and celebrate how far we’ve come together.”

The Civilian Conservation Corps constructed the camp, erecting cabins and a dining hall, and a small lake with a beach, at what was then called Swift Creek Recreational Demonstration Area, a project of the National Park Service.

While the buildings no longer stand, Group Camp 7 was built on land that later became Pocahontas State Park, and the marker is located across the road from the park’s main entrance.

“Virginia State Parks continue to work to recognize the historical contributions of African Americans and welcome visitors of all backgrounds to enjoy activities and programs at its 41 state parks,” said Dr. Melissa Baker, director of Virginia State Parks.

Group Camp 7 was one of the few recreational areas in the nation open to African Americans for group camping. Both the Girl Scouts of Richmond and the Phyllis Wheatley Branch of the YWCA offered summer camp sessions for African American girls.

“Camp Carey meant, for me, friendship from as far north as Alexandria, from as far southwest as Pulaski and Bristol,” said Ernestine Wilson. “I still have friends who were a part of Camp Carey’s experience. And we owe it all to groups of women from the Baptist General Convention of Virginia and the Women’s Missionary Union – one white, one black – who said to themselves, we’ve got to find something for our girls to do. And they did.”

Virginia’s historical highway marker program, which began in 1927 with the installation of the first historical markers along U.S. Route 1, is considered the oldest such program in the nation. Currently there are more than 2,600 official state markers.