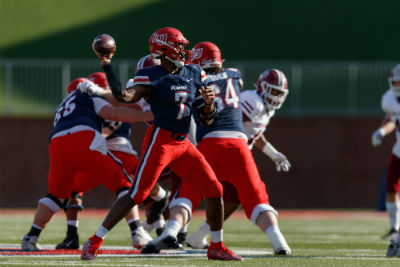 Malik Willis drops back to pass in the Flames’ 45-0 win over UMass. Photo courtesy Liberty Athletics.

Liberty’s Malik Willis has joined an elite group of players with the redshirt junior being named to the Davey O’Brien Award’s Quarterback Class of 2020 listing.

Willis, who has been on the Davey O’Brien Award watch list most of the 2020 season, is one of 35 players named to the Quarterback Class of 2020 listing.

Each of the 35 players on the list are now an official candidate to win the 2020 Davey O’Brien National Quarterback Award.

The quarterback has thrown for 2,040 yards, completing 151-of-236 passing attempts with 20 touchdowns. He has also rushed for 807 yards and 10 more touchdowns.

The Class of 2020 consists of players from all 10 FBS conferences, as well as FBS independent programs.

The Atlantic Coast Conference had the most honorees with seven, followed by the Southeastern Conference and American Athletic Conference with five. The list is made up of 13 seniors, nine juniors, nine sophomores and four freshmen.

Fans will vote via three social media platforms—Instagram, Twitter and Facebook—and the top vote getter on each platform will each receive the equivalent of two additional committee member ballots for that voting period. Fan voting will be done by liking the quarterback’s photo from the original post on the official Davey O’Brien social media account.

Following the naming of the semifinalists, the next round of fan voting will take place from Monday, December 7 to Sunday, December 20 with the three finalists named on Tuesday, Dec. 22.

The final round of fan voting will occur from Tuesday, Dec. 22 until Wednesday, Dec. 30. The winner will be announced on Thursday, Jan. 7 on the 30th annual The Home Depot College Football Awards, which will be held virtually from 7-8:30 p.m. (EST) on ESPN.

The Davey O’Brien Foundation was created in 1977, and the National Quarterback Award, the oldest and most prestigious college quarterback award, was first issued in 1981. Over its time, the Davey O’Brien Foundation has given away more than $1.2 million in scholarships and university grants to help high school and college athletes transform leadership on the field into leadership in life.