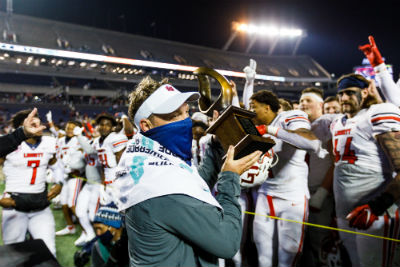 Liberty coach Hugh Freeze has been named one of six finalists for the 2020 George Munger Collegiate Coach of the Year Award.

Freeze led Liberty to a season of “firsts” in 2020, including the teams’ first-ever national ranking, first win over an ACC opponent, the best start in school history (8-0 to start 2020), first-ever win over a top-25 FBS program and back-to-back bowl game wins.

Under Freeze’s leadership, Liberty defeated a pair of ACC foes in Syracuse and in-state opponent Virginia Tech. The two wins made Liberty the first non-Power 5 team to post a pair of wins over Power 5 schools in the same season since Houston in 2015.

Liberty capped off the 2020 season with a thrilling 37-34 overtime win over No. 9/11 Coastal Carolina in the Cure Bowl on Dec. 26 at Camping World Stadium in Orlando, Fla. The win marked Liberty’s first-ever victory over a top-25 FBS ranked program.

With the Cure Bowl win over its former Big South rivals, Liberty became the second transitioning team in NCAA history to win consecutive bowl games during its first two full seasons at the FBS level.

The George Munger Collegiate Coach of the Year Award is named after former University of Pennsylvania coach George Munger. His devotion to ethics in athletics, and his commitment to education is the standard for which all college coaches should strive. The George Munger Award was founded in 1989.