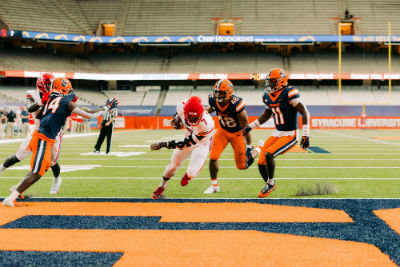 Liberty, in its second full season in FBS, has cracked one of the nation’s top 25 polls, entering the Associated Press poll at No. 25 today.

Following last week’s bye, No. 25 Liberty will travel to Blacksburg this weekend to face its second ACC foe of the season in Virginia Tech.

Kickoff from Lane Stadium is set for 12 p.m. The game will be broadcast on the ACC Network.

Liberty began the FBS reclassification process in 2017 and completed the transition prior to the start of the 2019 season.

This is the first time Liberty has been national ranked since the Flames were ranked No. 24 in the FCS Coaches Poll and No. 25 in the STATS FCS Poll on Nov. 7, 2016, during one of the Flames’ final seasons at the FBS level.

Liberty also recorded a program first when the Flames defeated Syracuse, 38-21, on Oct. 17, at the Carrier Dome, marking the program’s first-ever win over an ACC team.