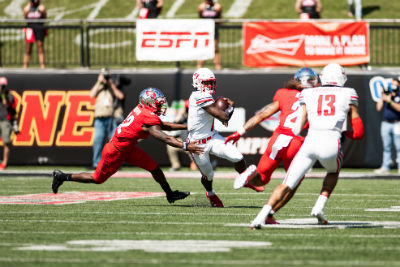 Liberty gashed Western Kentucky on the ground, rushing for 363 yards on the way to a 30-24 victory Saturday in the Flames’ season opener.

Malik Willis, making his first career start at quarterback after transferring from Auburn, had a monster game for the Flames (1-0), with 133 passing yards (13-for-21) and 168 rushing yards and three touchdown rushes on 21 carries.

His 168 rushing yards were the most by a Liberty quarterback in program history.

Joshua Mack rushed for 100 yards on 23 carries, giving Liberty two 100-yard rushers for the second regular-season game in a row.

Liberty held a 17-3 lead early in the second quarter before WKU (0-2) came back to tie it at 17-17 during the early stages of the second half. The Flames’ ground game took over from that point, leading to a pair of touchdowns that helped build a 30-17 advantage. The Hilltoppers drew to within six points with 3:04 left in the game, but Liberty ran out the clock to secure the victory.

The Flames outgained Western Kentucky 487-291 on the game.

Overall thoughts on the game: “To come to Western Kentucky today and beat a nine-win team from last year that returns 26 seniors and the addition of a dynamic quarterback, I think it’s a big win for our program. They had nine wins last year in Conference USA and probably expected to battle for that championship this year in that conference. I knew that this would be a good measuring stick of where we were in game one of year two of FBS play. I’m really proud of our kids and our staff. They’ve done a remarkable job during all of the different times that we’re in right now. Our administration, our academic team, our strength and conditioning staff and our nutrition team all did a great job of everything that was thrown at them. To come here and beat a senior-laden team that added a great quarterback from a nine-win season is a great start for us in year two.”

On the offensive line: “I’ve said the few times I’ve interviewed in fall camp that I felt really good about our O-line and our running backs. I knew we had question marks in some other places. I think that we won the line of scrimmage against a good defensive line, a good defensive front. That was huge for us today, to get the ball back up only six points and to be able to run the clock out, that’s totally on the offensive line and the running backs. I’m really pleased with that.”

On quarterback Malik Willis: “We’re pleased with most of his play today. He made some mistakes that we can correct. We knew he was athletic, knew we could do some things in the run game with him. I thought he was efficient in throwing the football. We really could have thrown it some more, probably. I probably started trying to run the clock out a little too early and probably should have thrown it a little bit more. I was really pleased. He’s got to get better at ball security when he’s running and stay in bounds there at the end. That would help us end the game a little quicker. I’m pleased for his first start in a college game.”