Liberty Football finishes in Top 25 in both national polls 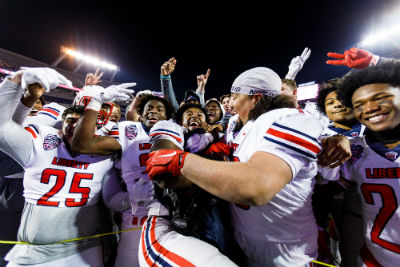 Liberty players celebrate after the Flames closed out a 37-34 win over Coastal Carolina in the 2020 Cure Bowl. Photo courtesy Liberty Athletics.

Liberty finished the 2020 season ranked 17th in the AP poll and 18th in the coaches poll, marking the first time the program has ever finished a season ranked in either poll.

The Flames (10-1) received their first-ever FBS Top 25 ranking on Nov. 1 when they were ranked No. 25 in the Associated Press top poll, then remained inside one of the national top-25 polls for seven out of the last eight weeks of the regular season.

It was a season of first for Liberty Football in 2020: the team’s first-ever national ranking, first win over an ACC opponent, the best start in school history (8-0 to start 2020), first-ever win over a Top 25 FBS program and back-to-back bowl game wins.

Liberty actually defeated a pair of ACC foes in Syracuse and in-state opponent Virginia Tech. The two wins made Liberty the first non-Power 5 team to post a pair of wins over Power 5 schools in the same season since Houston in 2015.

With the Cure Bowl win over its former Big South rivals, Liberty became the second transitioning team in NCAA history to win consecutive bowl games during its first two full seasons at the FBS level.