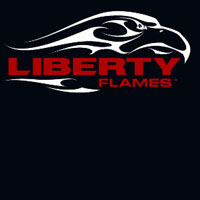 A big first half sparked the visiting Liberty Flames to a 41-7 win over the VMI Keydets Saturday afternoon in Big South Conference football action in Lexington.

The Flames (5-2, 2-0 Big South) were sparked by Mike Brown’s 283 yards of total offense, including 231 yards and three touchdowns through the air. 120 of those passing yards went to Chris Summers, who also had three touchdown catches in the Liberty win. VMI (2-4, 1-2 Big South) was thwarted in its effort to move to 3-0 at home for the first time since 1990, despite A.J. Gross’ career-high tying 16 tackles.

After an exchange of punts opened the contest, Liberty embarked on a seven-play, 84-yard drive for the game’s first touchdown. No play in the drive went longer than seven yards until the scoring strike, a 54-yard Brown to Summers pass. The Flames tacked on the extra point and were ahead, 7-0.