Let’s all pretend there already is a wall 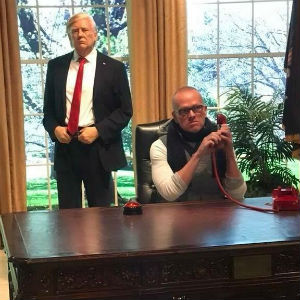 Congress isn’t going to give in to President Trump on his ransom demand for $5 billion for a border wall that the rest of us know will never actually be built.

Maybe we can get Congress to agree to the language of a press release.

For immediate release: Trump gets his wall

OK, sure, whatever, we all just looked, and President Trump, groan, he’d already built the wall. By himself.

And, we checked, and Mexico actually did pay for it.

Y’all happy? Can we all move on now?

This would be the gist of it. Might have to pretty it up a little bit.

This is all Trump wants, as you know.

To be able to say that he built the wall.

He knows his base doesn’t care if there is a real-life wall or not.

The New York Times can fact-check it later.

Um, we have satellite photos, no wall.

“More #fakenews from the Failing New York Times. Sad!” Trump would tweet. “The wall is beautiful. It’s amazing. Many are saying it’s the best wall they’ve ever seen.”

It would be the best wall they’ve ever seen.

How many of us have been to see the Great Wall of China?

The correct answer is c) not many.