Lazor: ‘It’s not going to be easy’ 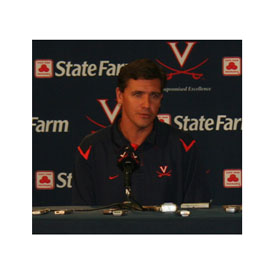 Bill Lazor knew what he was getting into when he was first approached by Mike London about his interest in taking over the University of Virginia football offense.

Virginia has been at or near the bottom of the I-A offensive unit rankings each of the past four seasons. Cracking the top 100 among the 119 teams in I-A would be an improvement.

“I knew what the numbers were offensively. I don’t remember them, honestly. I didn’t memorize them. I did, when I spoke to Coach London on the phone, I had them in front of me. I knew, but then I came here, and I kind of know what they were, but I don’t have them memorized, because it’s not that important,” Lazor told reporters Wednesday at UVa. football media day. “What’s important is what we do every day. You said incrementally. I know Coach mentioned that when he talked about what would be a success this year. If we had come into a place where it was a top-10 offense in the country, I don’t think our offensive staff would work any differently.”

Lazor and London see eye-to-eye on what they want to do to move the chains and put points on the scoreboard. It will be a dramatically different approach than had been advocated by former UVa. offensive coordinators Mike Groh and Gregg Brandon.

“It’s very important that we’re able to run the ball and establish a physical presence out on the field,” London said. “If you can run the ball, you can also set up the play-action passes that come off those complementary run plays. So it’s going to be important for us to run the ball, push people back, create holes. I think we’ve got good running backs. If we can just do that, control the line of scrimmage, I think we’ll be a much better team, because it will take pressure off the quarterback, so the quarterback can do what he needs to do, and set up the play-action passes.

Easier said than done on that, of course. Lazor knows the score.

“I know it’s not going to be easy. I was told that when I came. I didn’t expect it to be. But it’s never been easy anywhere I’ve been,” Lazor said.