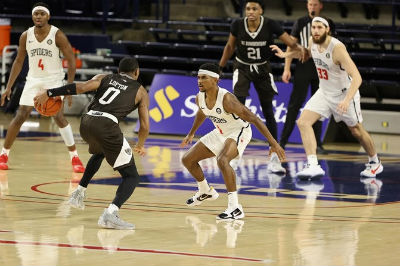 Kyle Lofton hit a step-back three-pointer from the top of the key with two seconds left to secure a 69-66 win for St. Bonaventure over Richmond Saturday night at the Robins Center.

Spiders guard Blake Francis had a chance at a deep three-pointer over a pair of Bonnies defenders, but his shot fell short at the buzzer.

“I thought we did some things well and executed in the special situations down the stretch,” said coach Chris Mooney. “They had a couple of critical offensive rebounds in the second half that lengthened the possession which denied us the opportunity to score to either take the lead or tie the game.”

Grant Golden’s first bucket of the night at 15:24 in the first half moved him into tenth on Richmond’s career scoring list with 1,609 points, passing his former teammate ShawnDre’ Jones.

Golden would finish with seven points, a team-high six assists and five rebounds.

In an uptempo opening half, the teams exchanged leads 11 times, with St. Bonaventure (3-1, 1-1 A-10) holding the lead for over 13 minutes. The biggest advantage by either team was a six-point edge by the Bonnies at 27-21 a little over four minutes before halftime.

The Spiders sprinted into the locker room on a 14-6 run, keyed by six points from Francis, including a three-pointer as time expired to give Richmond a 35-33 lead at intermission.

The Bonnies answered at the start of the second half, using a 12-5 run to take a 45-40 lead just over three minutes into the period. Richmond refused to let the Bonnies get much breathing room, narrowing their lead to one at 66-65 on a pair of free throws by Nathan Cayo with just over a minute remaining.

Following a St. Bonaventure turnover, the Bonnies fouled Grant Golden at the rim, sending Richmond’s forward to the line with 14 seconds to play. Golden converted one of two to tie the score at 66 and set the stage for Lofton’s game-winner.

Francis (21 points) was joined in double figures by Jacob Gilyard, who had 13 points and three steals, and Nathan Cayo, who registered 12 points and 10 rebounds for his third career double-double and first this season.

Richmond will host Rhode Island in Atlantic 10 action Wednesday at the Robins Center. Tip-off is set for 6 p.m. on CBS Sports Network.