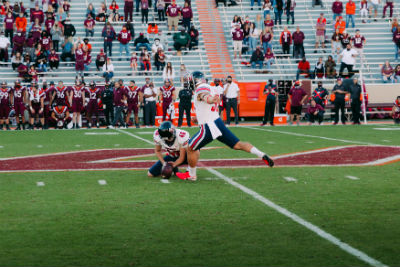 Liberty kicker Alex Barbir made a 51-yard field goal with one second remaining in the game. Photo courtesy Liberty Athletics.

Liberty kicker Alex Barbir made a 51-yard field goal with one second remaining in the game, moments after having a kick blocked and returned for an apparent game-winning touchdown that was negated by a Virginia Tech timeout, giving the #25 Flames a monumental 38-35 win Saturday at Lane Stadium.

Whoa, yeah, that final sequence – and the final two minutes, which had Liberty (7-0) going up a score on a Peytton Pickett 9-yard TD run with 1:41 to go, before Tech tied the game at 35-35 on a 12-yard TD pass from Hendon Hooker to Tre Turner with 52 seconds left.

Barbir set up for a potential game-winning 59-yard field goal with eight seconds left. The kick was blocked and returned for an apparent touchdown, but the Hokies had called timeout before the snap, giving Liberty another play.

Quarterback Malik Willis completed a short pass to get the Flames closer, and Barbir wsa perfect from 51 yards.

The win was clearly the biggest in program history for Liberty, which has won two games against ACC opponents – after defeating Syracuse earlier this year – in 2020.

Willis passed for 217 yards on 20-for-30 attempts with three touchdowns, while adding a team-high 108 yards rushing and one rushing touchdown.

Joshua Mack rushed for 90 yards on 19 carries. CJ Yarbrough led Liberty with five catches for 65 yards and one touchdown reception.