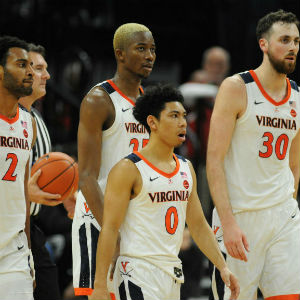 Good news: Kihei Clark drained a three with 2.6 seconds lift, lifting Virginia to a 56-53 win over rival Virginia Tech. Bad news: we all lost five years off the ends of our lives watching.

Virginia Tech (15-13, 6-11 ACC) scored just 11 points in the first half on 5-of-24 shooting, but scored on six of its first seven possessions in the second half to get back into it.

The Hokies kept making shots, and finally took their first lead of the game, at 47-46, on a three by Hunter Cattoor with 4:51 to go.

Clark scored on a short jumper at the 2:22 mark to get it back to one, then rebounded a missed Jalen Cone jumper.

Kody Stattmann, off dribble penetration, found Casey Morsell in the left corner for the splash three with 2:00 on the clock to put the ‘Hoos back on top.

It would stay right there until a short Tyrece Radford jumper tied things up with 11 seconds to go.

That still left Virginia the last shot in regulation, and Clark took the inbounds pass, crossover-dribbled himself open left of the top of the key, and calmly sank the open triple.

The win was the eight in nine games for Virginia, which hosts Duke with third place in the ACC on the line on Saturday at JPJ.

But there will be things to clean up between now and then. For the second straight outing, Virginia built a big lead and needed to close things out in the final seconds, and in this one, it also required a rally from the Cavaliers late to pull the victory out.

Flip side: that’s six ACC road wins now, with one more road game to go, next week at Miami.

Mamadi Diakite had 19 points on 9-of-13 shooting to lead Virginia Wednesday night.

Clark had 10 points, six rebounds and six assists in 39 minutes of floor time.

Braxton Key had 10 points and 11 rebounds.