Ladakh is situated in the laps of the Himalayas and the Karakoram mountain ranges. Known as a former Buddhist kingdom, Ladakh is famous for its monasteries, majestic mountains and turquoise blue lakes. Ladakh is called the “Little Tibet”.

Ladakh shares borders with Tibet in the east, Kashmir in the west, The Xinjiang province of China in the north, Pakistan in the north-west and Himachal Pradesh’s Lahual and Spiti in the south. 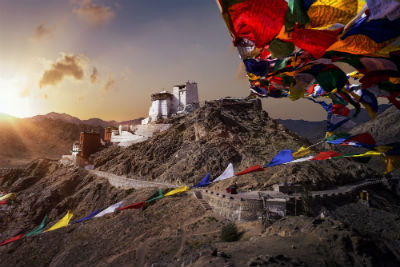 Leh, the capital of Ladakh is the largest town and the main hub for all the travellers. It is situated at 3500m and it was once an important trade centre for Central Asia on the Silk Route that served as a transit point for traders on the Leh-Yarkand (presently in Xinjiang Uyghur Autonomous Region, China) route.

How to reach Ladakh

Ladakh is accessible by air and road. There are daily direct flights from New Delhi. The region is also connected by roads from Srinagar and Manali. However, these roads are inaccessible during winter due to heavy snowfall. The 490 km-long Leh-Manali Highway usually opens from May to October. This road gives an adrenalin rush to anyone who takes it, with sharp turns and bends and one need to cross three high mountains passes – Rohtang La (3,980 m), Baralacha La (5,030 m) and Taglang La (5,328 m) – to enter Ladakh. The Leh-Srinagar road goes through beautiful mountains and stunning vistas and it is a less tiring journey compare to Manali.

The best time to visit Ladakh is from April to October. Ladakh is a high altitude cold desert, lying in the rain shadow area of the Indian Himalayas that blocks the monsoon rain clouds so the climate is dry and sunny. When the Leh-Manali and Leh-Srinagar roads are closed in winter due to snowfall, the airlines become the lifeline of the people. Winter is another great time to visit when the mountains are covered in snow and there are plenty of outdoor activities available. The Chadar trek and Snow Leopard sighting trek are the most popular activities.

How to travel around

The public transport in Leh is limited. The buses in Leh and surrounding areas are privately-owned hence the schedule of the bus service is often erratic. For the remote and far flung areas are connected through bus run by the road transport corporation, there are daily and weekly buses depending on the areas.

Taxis are the most convenient way to travel in and around Leh. For example, you can hire a car with driver for a tour to Nubra valley and Pangong lake, this trip is usually covered on 3 or 4 days.

If you plan to travel off the beaten path or if you want to do specific activities such as rafting, trekking or mountaineering, you should contact a reliable travel agency in Leh that can arrange all the required permits and logistics.

The predominant population of Ladakh is Buddhist and the regions is dotted with white washed stupas and monasteries of different schools of Buddhism. Leh Palace dominates the Leh town, situated on a hill and its roof offers a great view of the town and surrounding mountains. Right above the palace is Namgyal Tsemo monastery which is visible from every corner of the town. Built in the 15th century and it houses a 3-storey high Maitreya Buddha.

Shey was once the summer capital of Ladakh. Shey palace is known for its giant copper statue of Buddha gilded with gold. Thiksey monastery is the most photographed because of its resemblance with the Potala Palace in Lhasa, Tibet. The monastery is renowned for its 15-metre high statue of the Maitreya Buddha.

Certainly the most famous and well-known monastery is Hemis which is located at 45 km from Leh. It is one of the largest and wealthiest monasteries in Ladakh, Hemis is famous for the mask dance festival which is celebrated every year on the birth anniversary of Guru Padmasambhava.

Nubra valley or “the valley of flowers” is one of the major attractions in Ladakh. Nubra is situated at an altitude of 3,048m lower than Leh. Khardung La pass is the gateway to the famous Siachen glacier, the highest battlefield that lies to the north of the valley and the Karakoram Pass on the northwest.

The two most visited villages are Hunder and Turtuk. Hunder is famous for its sand dunes and double-humped bactrian camels. Turtuk on the other hand is known for the Balti tribe that still follows its age-old custom, it was opened to tourists in 2010. Diskit monastery is the largest in the valley, located just 7 km from Hunder village.

The high-altitude lakes Pangong and Tso Moriri are the most visited destinations in Ladakh. Pangong lake, situated at an altitude of 4,350m is 5 hours drive from Leh. The lake is 134 km long and almost 60% of the lake is in the Tibetan Autonomous Region. It is also an important breeding ground for numerous of birds, including a number of migratory birds.

Tso Moriri lake is situated at 4,522m in the southeast of Leh. The lake is the breeding ground for the highly threatened Black-necked crane. The habitats in the valley are nomads moving from one place to another with their sheep, goats and yaks. It is one of the highest brackish water lakes in the world, total of 19 km in length.