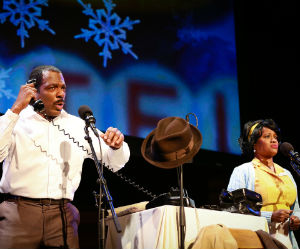 To mark the 50th anniversary of the death of Martin Luther King Jr., Washington and Lee University’s Lenfest Center for the Arts presents L.A. Theatre Works’  “The Mountaintop,” a fictional retelling of how the legendary civil rights leader spent his final hours on earth before his tragic assassination. Rife with cutting political humor and powerful with its stirring representation of one of America’s most celebrated heroes, “The Mountaintop” is a compelling story about a man whose relevance remains undiminished to this day.

“The Mountaintop” comes to the Keller stage for a one-night performance on April 23 at 7:30 p.m. There will be a talk-back with the cast directly following the performance.

On the evening of April 4, 1968, Martin Luther King Jr. was assassinated outside room 306 of The Lorraine Motel in Memphis. What events transpired inside room 306 the night before his death remains a mystery to this day.

In her play, “The Mountaintop,” playwright Katori Hall delivers what may have transpired in that room between the legendary civil rights leader and a  hotel maid. What follows is a compelling dive into the Reverend’s hopes, and regrets, in a story that connects humanity and immortality.

Winner of the prestigious Olivier Award for Best New Play, the show presents the audience with a different side of the great civil rights leader: a tired, vulnerable, man with his flaws and fears,  who remains an inspiration.

Hall comments, “It was imperative for me to show the human side of King. During this time, he was dealing with the heightened threat of violence, he was tackling issues beyond civil rights — economic issues — and was denouncing the Vietnam War. I wanted to explore the emotional toll and the stress of that. King changed the world, but he was not a deity. He was a man, a human being, like me and you. It was important to show him as such: vulnerable.”

Order your tickets online today at wlu.edu/lenfest-center or call the Lenfest box office at 540-458-8000 for ticket information. University Swipe Card is available. Box Office hours are Monday–Friday, 9-11 a.m. and 1-3 p.m. and will be open one hour before performance time. “The Mountaintop” is sponsored in part by the W&L Class of ’64 Performing Arts Fund.