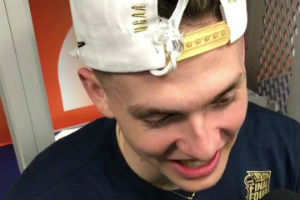 Kyle Guy was taken with the 55th pick of the 2019 NBA Draft, making the 6’2″ guard the third member of the national champion UVA basketball team selected on Thursday.

Guy was the Most Outstanding Player in the 2019 Final Four, scoring 24 points in the championship-game win over Texas Tech, and scoring six points in the final seven seconds, including three free throws with six-tenths of a second to go, in the one-point win over Auburn in the national semifinals.

A two-time first-team All-ACC selection, Guy led Virginia in scoring in 2018-2019, averaging 15.4 points per game, shooting 44.9 percent from the floor and 42.6 percent from three-point range.

He was also third on the team in rebounding, averaging 4.5 boards per game.

It wasn’t a certainty that Guy would hear his name called in Thursday’s draft going in. A number of mock drafts had left Guy on the outside looking in, but he had availed himself well at the NBA Draft Combine last month, scoring in double-digits in his two scrimmages.

But the Kings had shown a good bit of interest in Guy, having him in for two pre-draft workouts, the only prospect to get a second look from the team, which finished with a 39-43 record in 2018-2019.

The incumbent shooting guard is three-year pro Buddy Hield, who averaged 20.7 points per game last season, shooting 45.8 percent from the field and 42.7 percent from three-point range.