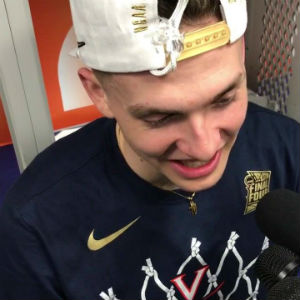 Former UVA Basketball star Kyle Guy has been called up to the main roster for the NBA’s Sacramento Kings, and will be in uniform for the Kings’ game at Washington on Sunday.

Guy, a 2019 second-round draft pick, has been putting up big numbers for the Kings’ G-League affiliate in Stockton, averaging 25.4 points and 5.7 assists per game this season.

Guy was signed to a two-way contract with the Sacramento Kings after an impressive Summer League session, in which he averaged 14.9 points and 2.6 assists per game, shooting 37.8 percent from the floor and 34.6 percent from three-point range.

Guy was the Most Outstanding Player in the 2019 Final Four, scoring 24 points in the championship-game win over Texas Tech, and scoring six points in the final seven seconds, including three free throws with six-tenths of a second to go, in the one-point win over Auburn in the national semifinals.

A two-time first-team All-ACC selection, Guy led Virginia in scoring in 2018-2019, averaging 15.4 points per game, shooting 44.9 percent from the floor and 42.6 percent from three-point range.

He was also third on the team in rebounding, averaging 4.5 boards per game.