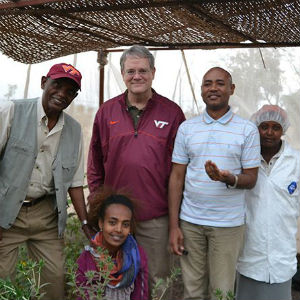 The hills of eastern Ethiopia are the scene of a partnership between Virginia’s two land-grant universities that aims to rid rural communities of a noxious and sometimes deadly pest.

Parthenium invaded Ethiopia four decades ago, said Muni Muniappan, director of the lab at Virginia Tech. The weed – sometimes called farmassia or “sign away your land” – crowds out crops and pasture grasses and, if eaten by cows, sours their milk. In humans, its poisonous leaves and pollen aggravate respiratory illnesses and cause severe skin irritations that can be fatal, especially to children and women.

With no natural predators in Africa to curb the plant’s aggressive spread, Muniappan turned to Virginia Tech alum Wondi Mersie to identify an insect that could control it.

Mersie, director of research and associate dean at Virginia State University, graduated from Virginia Tech in 1985 with a degree in plant physiology and weed science from the Department of Plant Pathology, Physiology, and Weed Science in the College of Agriculture and Life Sciences. He identified two bugs that fit the bill – a leaf-feeding beetle, zygogramma bicolorata, and a stem boring weevil, listronotus setosipennis. Research in Australia and South Africa has confirmed what Mersie was looking for – both insects have a voracious appetite for parthenium while leaving native plant species alone.

Mersie and the Virginia Tech team worked to bring other scientists and technicians from Ethiopia to South Africa to learn to employ the beetle and weevil as biological controls. The team then returned to Ethiopia to establish a quarantine facility at the Ambo Research Station, where they tested the plant’s natural enemies imported from Central America under local conditions.

“The results were promising,” Muniappan said. “The insects severely damaged the parthenium, largely stopping its spread, while causing no harm to native plants.”

Following the test, “we were able to get permits from regulatory authorities in Ethiopia and U.S. Agency for International Development to take the beetle and weevil into the field and release them.”

Following the initial results, the team spent much of 2017 working on multiplying these natural enemies and releasing them throughout Ethiopia’s fields. The two imported insect species devoured parthenium in every site they were released.

“Once established in the field, we found that the insects self-perpetuated, controlling the weed without any other intervention,” Muniappan said. The team’s next step is to expand its activities into neighboring Kenya and Uganda.

The Integrated Pest Management Innovation Lab is a project of the Center for International Research, Education, and Development, part of Outreach and International Affairs.

Vice President for Outreach and International Affairs Guru Ghosh said,  “This project shows the global impact our two land-grant universities can have, both in expanding our own capabilities and in having a real impact on communities around the world.”

Dennis Treacy, rector of the Virginia Tech Board of Visitors, visited the site in 2016 when a board member. In a news video, he talked about Virginia Tech’s work to “make sure that the programs that are in place are safe” as they work to “control or somehow reduce the presence of parthenium.”

Mersie said the effort could open the door to future collaborations. “The project brought the two institutions closer than before and created a great deal of good will and understanding of each other’s capabilities,” he said.