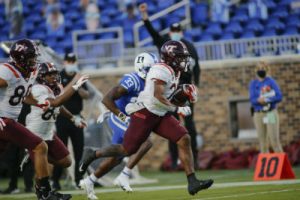 Khalil Herbert scores on a 60-yard run in the fourth quarter to put the game away for Virginia Tech. Photo courtesy Atlantic Coast Conference.

It will mark the first time that the Fort Lauderdale native has earned this honor.
Herbert (5’9”, 212 pounds) averaged over 10 yards per carry as he registered 207 yards on the ground against Duke last week, finding the end zone two times. His 207-yard output was tied for the fifth-best total in a single game in Virginia Tech history. The grad student also returned three kickoffs for 150 yards, including an 83-yard effort setting up a crucial Tech touchdown.

His 357 all-purpose yards mark a new program record for the Hokies, and he became the first Tech player to ever post 100+ rushing yards and 100+ kick return yards in the same contest.

On Monday, Herbert was named both the ACC Running Back and Specialist of the Week.