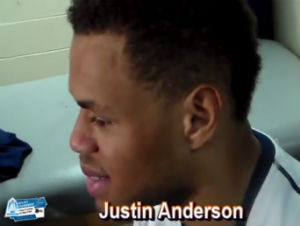 UVA Hoops alum Justin Anderson has latched on with the Toronto Raptors G League team, Raptors 905, and is putting up bonkers numbers.

Anderson, a 2015 NBA first-round draft pick, has not yet been able to catch on with a consistent gig in the NBA.

His playing time to date topped out in 2016-2017, when he averaged 16.4 minutes per game in a season in which he split time between Dallas and Philadelphia, and averaged 7.1 points per game on 42.4 percent shooting from the field and 29.9 percent from three.

He signed a free-agent deal with the Washington Wizards in the offseason, and put up good numbers with the Wiz in the preseason, averaging 9.8 points, shooting 41.4 percent from the floor and 38.5 percent from three, before being released.